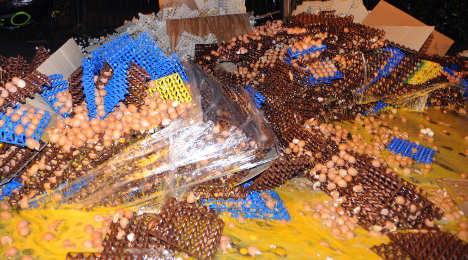 A group of rogue French farmers has said 'Un oeuf is enough' and this week went on a furious egg-breaking rampage, destroying tens of thousands on roads and pledging to smash many more in protest against low prices. Farmers have also promised to take more radical action.

"More than 100,000 eggs were destroyed in the Cotes d'Armor (a department in the northwestern region of Brittany)," a spokesman for the unnamed collective of angry poultry farmers, told AFP.

Poultry farmers in France have for several months complained of rock-bottom egg prices due to overproduction — a problem that also affects other countries in the European Union.

They say current prices do not make up for a rise in production costs or investments they had to make as part of an EU directive that came into force in January 2012 to protect the well-being of laying hens.

The spokesman, who wishes to remain anonymous, said masked farmers had broken the 100,000 eggs overnight from Tuesday to Wednesday near a Lidl supermarket and on a roundabout — an act that was also reported in local media.

"We will continue to destroy 100,000 eggs a day until Sunday," the spokesman said, after which he said the protest movement would become more radical "with inevitable collateral damage" if the group's demands are not met.

He said destroying 100,000 eggs a day equates to "five percent of the production" of poultry farmers involved in the collective.

The group called for France's entire egg production to be reduced by 5 percent to help raise prices, and  asked the government to set up a specific area for eggs to be destroyed.

According to Yves-Marie Beaudet, head of the egg section of a union that represents poultry farmers in Brittany, producers currently get paid 75 cents ($1) for a kilogram of eggs — whereas the cost price is 95 cents.

The UGPVB union says the European Union has "15 to 20 million" excess laying hens out of a total of around 350 million.

THis is not the first time in recent months French farmers have taken drastic action to try and protect their livelihoods.

In June The Local reported how Paris was turned into a big farmyard as sheep marched down the Champs Elysees in a farmers' protest over the costs of rearing animals.