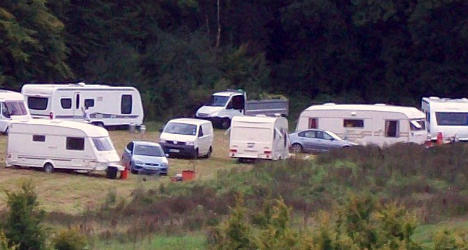 Paul Renaudat, mayor of the village of Chavannes, in the central department of Cher, told local police and a radio station he would kill himself if a group of 35 or so traveller families didn’t leave the area.

“I would go that far…It wouldn’t bother me, and my family has been informed,” Renaudat reportedly told local paper The Berry Republicain.

Despite the fact that the 50 or so caravans in question had left the village of Chavannes, Renaudat reiterated his ultimatum to French daily Le Parisien on Tuesday saying he would sacrifice himself for the good of France.

"The next caravan that turns up on communal land, I will disappear," he said ."There have been others who made sacrifices so the Republic could move forward and I am ready to do the same."

The exasperated Renaudat justified his extreme stance by saying he had a "moral contract" with his constituents that he would "defend tooth and nail".

According to Le Berry Republicain, the origin of the mayor's pledge centres around the continued presence of the travellers in a local stadium, and the strong criticism Renaudat had received from some of the village’s 200 or so residents.

After making the threat last Monday, local police visited the under-pressure Renaudat at his home and found him in good health.

He was brought to a local hospital by his family for a check-up, and law enforcement confiscated his hunting rifles.

“I didn’t give any parking permit [to the traveller families], and I was forced to put up with their presence for a week, “said Renaudat.

“So I felt I had failed in my mission as mayor, and that’s why I wanted to end my life,” he added.

Anti-racism campaigners have been quick to condemn Renaudat's threats as a ploy, however. "This guy is absolutely crazy," Bernadete Hétier, co-president of the anti-racism group MRAP told The Local.

"What he's trying to do is exert pressure for a completely undeserving cause, and we should not be sensitive to such pressure. This is completely unacceptable," she added.

For his part, however, Renaudat has denied he holds anti-traveller or racist views, and is acting only for the good of local residents.

"I have nothing against these people [travellers]," he told Le Parisien. "What I want is for them to also respect residents. Each person's freedom extends to the point where someone else's begins," he concluded.

Renaudat’s suicide threat is only the latest in a series of recent controversies surrounding the traveller and Roma communities in France.

The 85-year-old right-wing firebrand made comments in Nice on July 4th where he labelled the local Roma community a “smelly” and “rash-inducing” presence in the southern city.

For her part, Hétier sees this recent spate of controversial statements as part of a cynical drive for votes by politicians, especially those on the Right concerned by the rise of the far-right National Front.

"We will have local elections next year in France, and you can rest assured that these people who engage in this kind of unacceptable talk will try to use it to get elected or re-elected," she said.