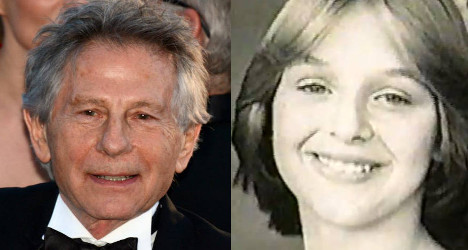 The woman who was sexually assaulted by filmmaker Roman Polanski in 1977 when she was 13 is to publish her memoirs, a French publishing house said Monday.

“The Girl. A Life Lived in the Shadow of Roman Polanski” by Samantha Geimer, now 49, is due to come out in the United States on September 17 and in France on October 3.

A spokeswoman for French publishers Michel Lafon told AFP the book was “not really an attack on Polanski”, but added that the French version would be entitled “Moi, Samantha, 13 ans, violee par Roman Polanski”. (Me, Samantha, 13-years-old, raped by Roman Polanski).

The book's cover will use a colour photograph of Geimer taken by Polanski three weeks before the sexual assault, according to the publisher.

Polanski was initially charged with six felony counts, including rape and sodomy, but the charges were later reduced under a plea deal made in part to spare Geimer the ordeal of a trial. He pleaded guilty to having unlawful sex with the teenager.

Polanski, who had had a string of hit films including “Rosemary's Baby” and “Chinatown”, served 42 days at a secure unit but fled the United States on the eve of his sentencing in 1978 amid fears the trial judge planned to go back on a previously agreed plea deal.

He fled to France where he couldn’t be extradited back to the US. .

SEE ALSO: Top Ten scraps between the US and France

Polanski won an Academy Award in 2003 for his Holocaust drama “The Pianist” but did not pick up the prize in the United States, where he faces an outstanding arrest warrant in the Geimer case.

In 2009, he was arrested on an international warrant at Zurich airport over the decades-old child sex case as he was headed to the city's film festival.

Polanski spent 10 months in Swiss custody before convincing the authorities in Bern not to honour a US extradition request, and instead to release him.

The Franco-Polish director in 2011 told a television interviewer: “I have regretted it for 33 years.”