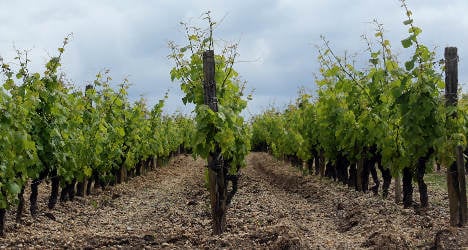 Vineyards in both Bordeaux and Burgundy have been hit by hailstorms this summer. Photo: Nicolas Tucat/AFP

The year 2013 may not be a good vintage for French wine.

While most of France has been enjoying the summer weather, wine growers across the country have been left counting the costs after hail storms ravaged their crop.

And with 21 departments, including those around Bordeaux, the Loire Valley and Burgundy on storm alert, there may be worse still to come.

Earlier this summer some of Burgundy’s most prestigious vines including Pommard were destroyed by hail stones for the second year running.

And last weekend it was the turn of vineyards in Bordeaux to take a battering from the extreme weather, as hail storms destroyed an estimated 7,000 hectares of vines.

In all, 37, 000 hectares suffered varying degrees of damage.

The wine growers around Entre-deux-Mers were the hardest hit, with between 300 and 400 vineyard owners affected.

The cost of the damage has been estimated to be around €4,000 a hectare, and there are fears there will be knock-on effects including job losses.

To make matters worse, not all winegrowers were insured against the damage by hail.

Wine growers held an emergency summit with local officials on Monday to call for compensation and measures to be taken to soften the blow.

On Tuesday, the prefecture of the Gironde region announced that they would buy up harvests, offer exemptions from property taxes on undeveloped land as well help with VAT and social security payments to those affected.

Access to the state’s agriculture disaster fund will also be offered to those worst affected.

“The government is conducting an initial assessment of the damage, in order to draw up a balance sheet as soon as possible,” the Ministry of Agriculture said in a statement on Monday night.

On Monday the hail storms were back, this time causing widespread damage over the Loire region in the centre of France.

The Loire is one of 21 departments on “Orange Alert” for storms on Tuesday as well as much of the south west and regions further north including Burgundy (see map below).

According to French weather site La Chaine Météo, the storms will be violent and marked by heavy downpours, lightning and gales of up to 100km/h.