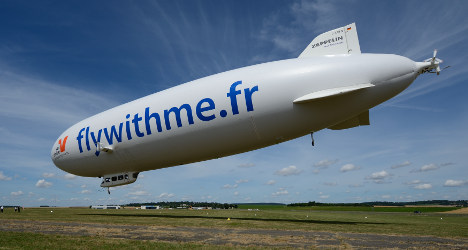 The new Zeppelin as it takes off for its maiden flight over Paris. Photo: Eric Feferberg/AFP

Twelve lucky passengers boarded the first flight on the new tourist Zeppelin, which offers unbeatable views of the French capital and the surrounding area.

"This is a historic day. There has never been a tourist Zeppelin flight in France, " said Franck Glaser, from Airship Paris, the company that runs the Zeppelin tours.

The first flight took in views of the French capital's finance district La Defense as well as the Eiffel Tower.

The aircraft is 75 metres long, travels at an average speed of 70m/ph and flies at an altitude of around 300 metres. It is also fuelled by helium, making it a pretty safe mode of transport according to British pilot Katherine Board.

"This aircraft is probably the most safe aircraft because the gas inside is helium, and this is a completely non-flammable gas. The fuel tanks are actually inside that non-flammable gas, so helium cannot burn," she told AP television

The Zeppelin is one of only three aircraft of its kind operating in the world. Seven flights are scheduled each day until the end of October.

Airship Paris is offering four tours starting from its base in Pointoise costing between €250 and €650 which will take in Paris, the Chateau de Chantilly, the Château de Versailles as well as the Vexin National Park.

For more information on the Zeppelin visit www.airship-Paris.fr