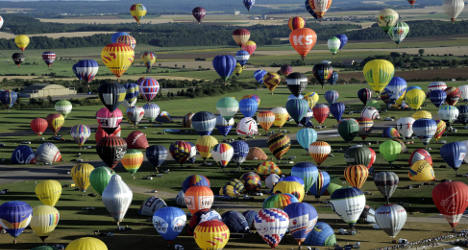 Participants in the Lorraine Mondial set a new world record by launching 408 hot air ballons into the skies at Chambley-Bussières near Metz. Photo: Alexandre Marchi/AFP

Despite inclement weather the massive sky gathering managed to break two records, with 408 colourful balloons in the air at one time and a massive 391 of them lined up at one time for take-off.

Organizers of the Lorraine Mondial Air Ballons festival, however, which drew upwards of 350,000 people, lamented capricious weather conditions and bad behaviour by some of the participants.

"In 25 years it's the year with the fewest flights (because of) very uncertain weather, too much wind some evenings as well as storms," founder Philippe Buron Pilatre told AFP on Sunday.

Fewer than half of the 19 mass flights planned over the ten days of the festival could be held, he said.

Pilatre also regretted "forms of incivility" among some participants, notably around 20 pilots who deliberately landed their balloons on cropland instead of on roads and lanes, drawing the ire of local farmers.

This video gives a flavor of some of the spectacular sights on offer during the festival.