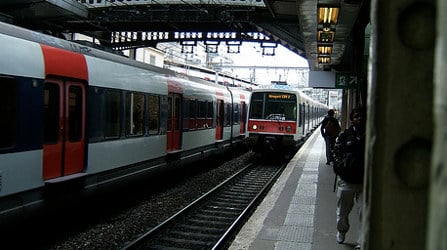 We’re all familiar with how embarrassingly easy it can be to get on the wrong train and end up stranded far from our intended destination.

But what about a train getting on the wrong track?

That’s what happened in Paris on Sunday morning, when a regional RER D train found itself on entirely the wrong route, causing a one-hour delay for its 150 or so passengers, and a merciless reaction from French Twitter users.

The service to Villiers-le-Bel, a northern suburb of Paris, ended up at La Plaine-Stade de France, a suburban stop on the RER B route, before slowly backtracking as far as the French capital.

“There, the 150 passengers were transferred on to another train,” a spokesman for national rail provider SNCF was reported as saying by French TV TF1.

“In total, they lost about an hour’s journey time,” he added.

Though uncertain what caused the embarrassing mistake, the spokesman claimed it could have been due to a signalling error or computer programming fault, possibly linked to a recent change in train timetables.

"At no time was the safety of passengers placed in jeopardy," said the spokesman. "The train could not have found itself faced with another train," he added.

Whatever the cause, French Twitter users were, perhaps predictably, merciless in their reactions to the incident.

“I need to go to Cannes for my holidays – can I take the RER D?” asked one user sarcastically.

Referring to the Paris-area public transport authority, another Twitter user claimed: “RATP announces the launch of the RER F, as in ‘Fake RER'.”

Despite being the target of scorn over the incident, French train drivers have shown themselves in the past to be far more understanding about errors made by passengers.

In May, The Local reported how SNCF staff made an exceptional stop after an elderly lady visiting France from the Caribbean accidentally boarded a train to Nancy instead of Reims.