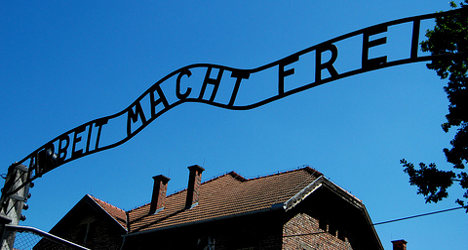 US Senator Chuck Schumer led a bipartisan group of sponsors in introducing the measure late Wednesday that would make the railway culpable in American courts, and allow US victims to pursue lawsuits against the company.

The bill seeks to counter the SNCF's argument that it is immune to legal action thanks to the Foreign Sovereign Immunities Act.

A companion bill was introduced in the House of Representatives in April.

Similar legislation was introduced during the previous Congress, in 2011, but the measure stalled.

"Survivors and family members of those who perished have long attempted to hold SNCF accountable for its active role during the Holocaust, but so far the company has succeeded in cloaking itself in foreign sovereign immunity, evading jurisdiction in United States courts," Schumer said in a statement.

SNCF has formally expressed remorse for the Nazi collaboration and insisted it was forced by France's World War II German occupiers to help deport 75,000 French Jews to the gas chambers, and noted that 2,000 of its own rail workers were executed.

The company today is seeking tax-payer funded rail contracts in the United States.

For year survivors and their relatives have sought to hold SNCF accountable for its role in the Holocaust.

A victims group, the Coalition for Holocaust Rail Justice, applauded re-introduction of the bill, saying it would open avenues for legal action against SNCF if it passes Congress and is signed by President Barack Obama.

"It has been more than 70 years since the first SNCF transports from Drancy toward Nazi death camps, yet I still remember the haunting night I jumped from an SNCF train bound for Auschwitz as if it was yesterday," said Leo Bretholz, one of hundreds of victims seeking justice.

"Seventy years is far too long to wait for a company to accept responsibility for the death and suffering it caused," Bretholz said in a statement.