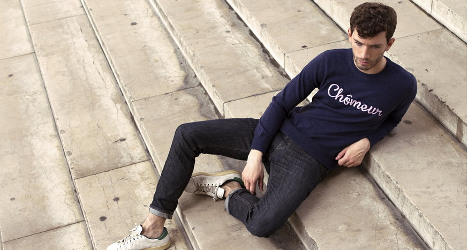 With a record number of French people out of work, perhaps entrepreneur Leon Taieb was simply hoping to take advantage of an ever expanding market.

However the Parisian's idea to come up with a new range of sweatshirts with the word "chômeur" (unemployed, jobless) printed on the front does not appear to have gone down too well, if the reaction in France's Twittersphere is anything to go by.

The new line was to coincide with the launch of the online sales site for his brand Le Leon but Taieb has been accused of mocking a situation that sees thousands more French people out of work each month as the economy grinds to a halt.

And he has been accused of rubbing salt into the wounds by charging €285 for the cashmere sweatshirts – slightly out of range perhaps for your average unemployed person.

“How shameful! To take the piss in this way. Show your support! #indecency #jobless #ban”, one tweeter wrote.

Other tweeters attacked the entrepreneur not just for being tasteless but for being sexist, because there was no female version of the word "Chômeur", which is "Chômeuse"

“They are hideous, deplorable and sexist. But it doesn’t stop these tops from leleon.fr from going viral,” tweets @RaphaelFerber.

Taieb however dismissed the criticism that the sweatshirts are tasteless.

“People really shouldn’t take it seriously,” Léon Taieb told FranceTVinfo on Thursday. “I just wanted something cute. The word ‘chomeuse’ (a jobless female) for example, sounds less cute – that’s why the top only exists for men.

"I think ‘Chômeur’ is a really cute word. [It makes you think] of holidays and those times when you’re messing around.”

Taieb's other line of sweatshirts emblazoned with words have also come in for criticism.

Other slogans include “salopette” (or “little b***h”, which also conveniently translates as “dungarees”), “heroine” (heroin), “Grande Gueule” (“Loud mouth”) and “Frog Killer” (make of it what you will).

Is he insensitive or a clever entrepreneur? Let us know in the comments section below.

BUSINESS
Unemployment in France falls slightly despite the lockdown
Url copied to clipboard!