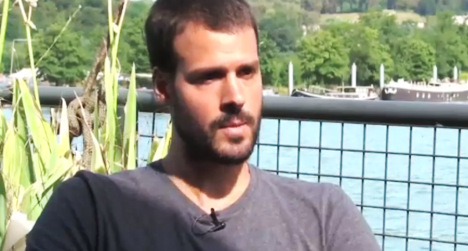 In a detailed account of his ordeal to weekly Paris Match, 34-year-old French photographer Jonathan Alpeyrie — who returned to France last week after being released — spoke of the 81 days he spent in captivity before being freed by a pro-Assad official.

"I was betrayed by my fixer (local translators who help journalists in foreign countries), who sold me out," he said, remembering the moment on April 29th when masked men stopped his vehicle on the road to Rankos, north of Damascus.

"They pushed me to my knees and pretended to execute me with several gun shots. Then they gagged and handcuffed me."

He was taken to a house along with the fixer, who was later freed by another group of "bearded" men.

Alpeyrie, who works for the New York-based Polaris Images agency and had been in Syria for ten days when he was kidnapped, spent three weeks tied to a bed as bombings raged around him.

Reporters Without Borders describes Syria as "one of the world's most dangerous countries for media personnel", with at least 24 journalists killed and 15 foreign reporters having disappeared or been abducted since the start of the conflict in March 2011.

Alpeyrie eventually met the chief of the clan holding him captive — "Assad, an Islamist", whose group "Katiba al-Islam" controls Rankos.

"One day, they simulated the act of cutting my throat", he said.

Eventually he was moved to another house in the countryside, where he spent the first week chained to a window before being allowed to move more freely.

"As the weeks went by, the bombings were becoming more intense. You could feel that the (regime) soldiers were getting nearer. We were attacked by MiGs (Russian fighter planes). The bombs were falling just 50 metres (164 feet) away," he said.

Alpeyrie told the weekly magazine that he also witnessed the torture of four Christian Shabihas (pro-Assad militia) who had been captured.

"They were setting dogs on them, they hit them with their belts. I heard their screams, it was horrible. It lasted a week."

The photographer also recalled lighter moments with his captors, including teaching Assad to swim in a nearby pool.

"In the water, he started to panic. I held him like a baby," he said.

Then on July 18th, a "sheik" told him he was going to be freed. He was driven to Yabroud, north of Damascus, to the man's flat.

"Two men arrived… One of them spoke perfect English. He told me: 'Jonathan, you are now free. We are from the government and you're going to Damascus'.

"I collapsed. I could picture myself ending up in a government prison."

He was driven to a house in Damascus where he says he met the "businessman" who paid a "ransom" to the rebels.

Alpeyrie was driven to neighbouring Lebanon, from where he eventually flew to Paris.