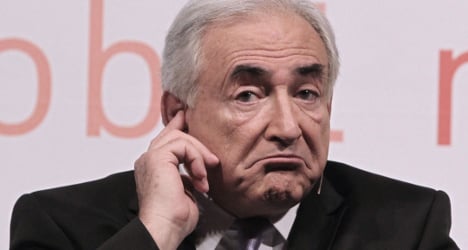 The trial of former IMF chief Dominique Strauss-Kahn, accused of "aggravated pimping" in an alleged prostitution ring in France, will take place next year, a source close to the case said Wednesday.

Strauss-Kahn has been charged with "aggravated pimping as part of a group" in the so-called "Carlton affair" — one of a string of lurid cases that emerged after he resigned from the International Monetary Fund over an alleged sexual assault on a New York hotel maid.

According to a source close to the case, who wished to remain anonymous, the trial will take place in 2014.

The case centres on allegations that business leaders and police officials supplied prostitutes for sex parties in the northern French city of Lille, some of which are said to have taken place at the upmarket Carlton Hotel.

Prosecutors in June had called for charges against Strauss-Kahn, 64, to be dropped, saying there was insufficient evidence to proceed to trial.

But last week, the Lille prosecutors' office said investigating magistrates had ordered him and 12 other defendants to face trial.

In the French legal system, investigating judges can overrule recommendations from prosecutors and force them to take suspects to trial.

There had been some speculation that prosecutors might appeal the magistrates's decision — but on Wednesday they announced they would not.

The charge of "aggravated pimping as part of a group" is punishable by up to 10 years in prison and a fine of up 1.5 million euros ($2 million).

Strauss-Kahn has admitted to attending sex parties in France and the United States, but has said he did not know some of the women were being paid.

Until his downfall, Strauss-Kahn had been seen as the leading candidate of the Socialist party to challenge Nicolas Sarkozy for the French presidency.

But he told Russian television on Wednesday that his political career was over and he was instead working as an economic advisor.

"Politics for me is in the past," Strauss-Kahn, who resigned from the IMF's top job in 2011 after being accused of sexual assault in a New York hotel, told state news channel Rossiya 24 in an interview.

"Today, I am working as an advisor to big companies in numerous countries in all the corners of the world — in Russia, Africa and Latin America," he added.

"I try my best to fulfil my role and give the most accurate advice possible," he said in the interview, which was conducted in French but dubbed into Russian.

In December, he agreed to pay undisclosed damages – reportedly in excess of $1.5 million – to Nafissatou Diallo, the New York hotel maid whose 2011 allegation of sexual assault forced him to resign from his IMF job.

Strauss-Kahn admitted a sexual encounter took place but said it was consensual. A criminal investigation into the incident collapsed after the maid changed her version of events, leading prosecutors to conclude there was little chance of a conviction.