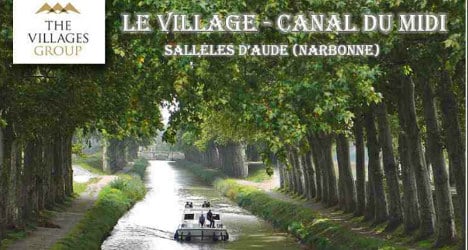 When French mayor Yves Bastié gave the green light to plans for a new village for over-50s in the southern-central commune of Sallèles-d'Aude, in southern France last March he had no objections.

But it appears a key element of the project, described as an "active lifestyle village" may have been kept firmly in the closet.

On Tuesday the mayor was shocked to discover that the village, named Le Village – Canal du Midi, due to its location near the famous canal (photo) was in fact intended only for gay people.

“I’m dumbfounded because I didn’t know anything about it,” said the mayor in French daily Le Parisien.

“I asked my colleagues to confirm the information and if this turns out to be the case then the least I would have expected is for them to have informed me,” the mayor added.

In a previous interview the mayor expressed his delight that Le Village was coming to his area.

"I fought for this project to get the go-ahead and we fought to bring Anglo Saxon investors to the area. This project, worth between €20 million and €30 million, is not here by chance," he said.

According to the regional newspaper l'Independent there was no mention in the preliminary discussions that the village would only be for gay people. In fact the newspaper says a photograph included on the plans showed a heterosexual couple walking through the grounds.

The paper points out that an almost identical image is featured on the brochure, but this time they couple are gay.

The company behind the camp, the British-owned Villages Group, which builds retirement villages in France, advertises the holiday camp on its website as “a private oasis for the over-50’s Gay and Lesbian (LGBT) community who want an ‘active and healthy lifestyle’ in the warm, friendly and healthy climate of southern France.”

Responding to the claims, Danny Silver, the managing partner of the company told The Local: "We’re not changing what the village is at all it’s just that we are orienting it towards the gay community. We can’t stop gay people or indeed any other kind of person. The license is for a village: that is what we’re doing."

Silver said that the company only made the decision to target the gay market yesterday.

“The market was dead as no one wants to invest in the Eurozone at the moment so I decided to give the gay market a go. I said that if by the end of August we get a reaction we’ll do it. If we don’t we’ll close it down. And with all the publicity we've got I’ve found the gay market does work.”

He added that the proposed village would also be a good economic opportunity for the area: “If you look at it logically this will bring a lot of money to the area. There’s a lot of unemployment there."

Silver, who has lived in France for 15 years is reluctant to call the project a "retirement village", preferring instead to market it as an "active lifestyle village".

Around 20 percent of people will go there to retire, the rest will go on holiday, he says.

Located close to the famous Canal du Midi, an UNESCO world heritage site, the village also boasts “full ‘Concierge Services’” and around 107 detached houses, priced at between €236,000 and €248 000.

Residents must also pay an extra €70 per week towards the management of the village where they will also have access to a swimming pool, sauna, gym, bars and restaurants.

Construction is set to begin in February next year.