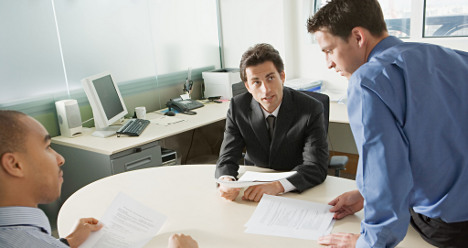 Whether its an American CEO claiming they talk all day or Swiss recruitment firms saying they are lazy, French workers have come in for some unfair stick in recent weeks.

Perhaps much of the negative reputation French workers have around the world stems from the introduction of its famous 35-hour working week, which caused much ridicule in Anglo countries when it was introduced back in 2000.

But a recent survey published by France’s Labour Ministry suggests the reality is workers in France are putting in almost as much hard labour as the rest of us.

The survey, published by the ministry’s department of statistics (Dares), revealed that in 2011 full-time workers in France put in an average of 39.5 hours each week.

And it's even longer for those in management positions, known as "cadres", where the average working week stood at 44 hours in 2011, the Dares study revealed.

The statistics show the French are spending more time with their nose at the grindstone than before, with the length of the average working week having increased by 1.7 percent since 2003.

However the study shows that the French are still working less than almost every other nationality in the EU, where the overall average working week lasts 40.4 hours.

Andy Denison, who runs the consultancy site Monamiandy.com said: The 35-hour week is just how the jobs are formulated on contracts, it is not a legal maximum.

“In France you can actually work up to a maximum of 48 hours each week.  Most people will actually work more than 35 hours a week,” he told The Local.

Although in theory France has this official 35-hour working week, various measures have been introduced since it was brought in under Prime Minister Lionel Jospin 13 years ago that allow employers to bend the rules.

Workers have the right to work a certain amount of overtime and they are also granted RTT (Reduction de Temps Travail) days, which are basically extra days off a year to make up for the fact that employees are working more than the allotted time on their contract.

The number of RTT days can vary, but for some employees they can even amount to more days than some workers in the US are given as holidays.

French author Aurélie Boullet (alias Zoé Shepard) who has written a book on French working culture said anyone coming to work France should not expect to only work 35 hours a week.

“You cannot judge the amount of time the French work on the fact we have this law on the 35-hour working week,” Boullet told The Local.

“People should not have this image of France where everyone works 35 hours each week. It’s wrong, the reality is very different.

“The reality is some people in France have long working weeks and others don’t. It varies from job to job and sector to sector.

“As for those who say the French are lazy it’s not true. There are lazy people of every nationality and there are also workaholics in every country, too."

However, despite debunking one myth about France, the study from the Labour Ministry does show that the French are still working less than almost every other nationality in the EU, where the overall average working week lasts 40.4 hours.

France came in 21st out of the 27 countries, who were members of the EU in 2011. Only Ireland, Belgium, Finland, Holland, Italy and Denmark had a shorter average working week.

Top of the list with the longest average working week was Britain where employees slog away for an average of 42.2 hours.

However the positions in the league table change slightly when part-time workers are included.

Full and part-time workers in France work an average of 36.6 hours a week, longer than the average working week of EU nations which stands at 35.6 hours and longer than that of the UK, Germany, Austria and Sweden.

Do you work in France? Do you work a strict 35-hour week? Tell us about your experiences in the comments section below.