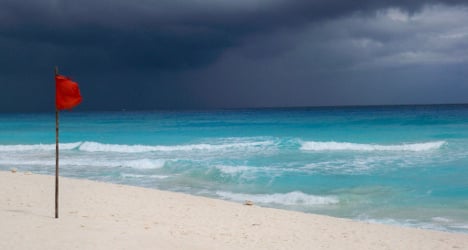 A total of 15 people drowned in seas, rivers and lakes across France over the weekend including seven men in the Med when high winds and strong currents made swimming suddenly treacherous.

Since the tragedy authorities have claimed that swimmers and surfers, especially holiday makers are unaware of the risks of taking a dip in the Mediterranean and worse they are regularly ignoring safety advice.

"It's very dangerous to ignore the rules. What happened on Sunday was rare. It was not normal for that to happen in one section of the coast. The winds and the currents created the rough seas.

"Holiday makers are more at risk because because they don't know the sea, like locals do. People who live here know it can be dangerous but often holidaymakers think it is completely safe to swim in the Mediterranean

"Surfers had been issued with warnings, but they still want to go out looking for waves."

Pierre de Bousquet prefect of the Herault department, where the drownings took place slammed the wrecklessness of certain beachgoers.

“Unfortunately it has been dark weekend, thanks to the carelessness of bathers,” he told Midi Libre newspaper. De Bousquet, a prefect for the Languedoc-Roussillon region said he would send a letter to Hérault’s mayors urging them to demand firmer restrictions when the red flag is up.

A French lifeguard from a first aid post told The Local it was imperative for swimmers to listen to their advice and respect the flag system.

"If there's a green flag then its safe, it if's orange it means it's dangerous and if it's red then it's totally forbidden. If anyone has any doubt then they should just stay on the beach," he said, asking to remain anonymous.

Stéphan Rossignol, Mayor of the popular seaside resort of La Grande-Motte, where a 40-year-old man drowned on Sunday, told Midi Libre, the police were doing all they can to protect swimmers from danger.

“For 7km of beach we have six lifeguards from the state security police force and 14 seasonal workers with canoes and jet skis, a presence that is doubled by nautical team of municipal police and a speedboat which covers the 300-metre stretch,” Rossignol said.

“They can ask people to get out of the water with a megaphone.”

According to the Institut de veille sanitaire (INVS), a health watchdog institute, there were 1,453 drowning incidents last year out of which 662 died, with around half of them in the sea.

France's Atlantic coast is considered more dangerous than the Mediterranean, because of the greater strength of currents. Earlier this month The Local reported how British teenager Kieran Knight tragically drowned after getting into difficulties swimming in the sea near the town of Messanges.

He was believed to have been caught by a strong undercurrent and unable to get back to shore.

According to reports in the local French media the pair, who have not been named, were swimming in an unsupervised area between two different aid stations.

A French lifeguard from an aid post told The Local it was imperative for swimmers to listen to their advice and respect the flag system.

"If there's a green flag then its safe, it if's orange it's dangerous and if it's red then it's totally forbidden. If anyone has any doubt then just stay on the beach," he said, asking to remain anonymous.