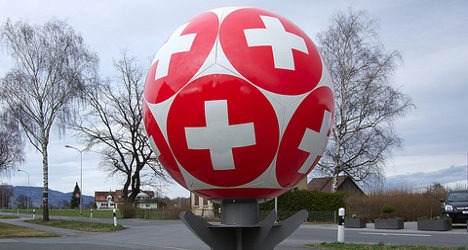 France's rush to tax nationals who inherit from Swiss residents will backfire by spurring many wealthy Frenchmen to move to Switzerland, taking their tax euros with them, observers say.

France "has shot itself in the foot, several times," Claudine Schmid, a French parliamentarian of the rightwing UMP party, told AFP on Monday.

Her comments came after Paris and Bern signed a deal earlier this month changing the way cross border inheritance is taxed, as part of a French drive to rake in taxes.

France, which has also been pushing Switzerland to lose its long sacrosanct banking secrecy and help it track down French nationals with hidden Swiss bank accounts, is eager to tax its residents who receive inheritances from across the Swiss border.

The change still needs to be ratified by both the Swiss and French parliaments and which is not set to take effect until 2015 at the earliest.

But when it does it will dramatically increase the tax burden on French heirs of estates in Switzerland, which caps its inheritance tax at 7.0 percent, compared to 45 percent in neighbouring France.

Schmid, who represents French nationals living in Switzerland and Liechtenstein and who opposes the change, said she already knew of two future heirs of Swiss residents who had decided to move to the small, wealthy Alpine nation.

One, a Frenchman in his 60s, was planning to move from Paris to join his parents and  sister in Switzerland, she said. She also knew of a Swiss citizen living on the French side of the border near Geneva who was getting ready to move back.

"He has put his house up for sale," she said.

Geneva-based tax expert Philippe Mortge also said he had been receiving calls from French citizens who had sold everything in France, "cars, stocks, works of art and even a Cote d'Azur apartment," wanting advice on how to move to Switzerland.

The people he talks to insist they don't want to hand over nearly half of their estate to French tax authorities, he said.

In the past, many people may have used Swiss banking secrecy as a shield to keep their wealth out of view from the French tax man. Since France's former budget minister Jerome Cahuzac was forced to resign in disgrace earlier this year over an undeclared account, the tax authorities have been cracking down especially hard.

"Banking secrecy is dead, and the dawn of tax exiles has arrived," Mortge said.

Schmid insisted Monday the inheritance tax shift would cause a new wave of French tax, or rather pending heir, exiles. They would thus not only escape French inheritance tax but also stop paying payroll and other taxes in the country.

Many Swiss also oppose the law change, with around a dozen parliamentarians – from the Greens through the centre and to the right – recently condemning the accord as "completely unfavourable for Switzerland".

According to the deal, a Swiss national living in France who inherits 850,000 euros will according to the new deal have to pay over €156,000 to the French tax authorities.

He or she would have paid nothing if they lived on the Swiss side of the border, according to Caroline Gueissaz, of the cantonal Neuchatel parliament.

Geneva parliamentarian Bertrand Buchs meanwhile described the agreement as a "catastrophe" for the canton.

He pointed out that some 53,000 Swiss citizens living right across the border — many of them commuting daily into Geneva — would be subjected to the new French inheritance tax.