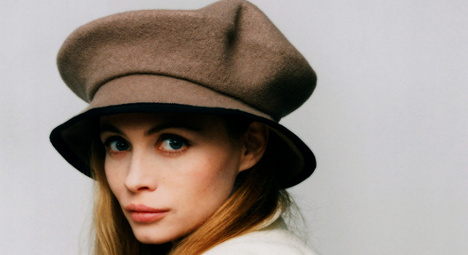 It's time to stop thinking all French women are as beautiful as Emmanuelle Béart, argues Piu Marie Eatwell in 'They Eat Horses Don't They? The Truth about the French'

Author Piu Marie Eatwell came to France ten years ago and like many Brits, who arrive on these shores, came with a romantic view of France and all things French.

But over time she realized that the reality was often far from how she had imagined it. In her new book 'They Eat Horses Don’t They? – The Truth about the French' Piu Marie Eatwell tears apart 45 myths about the country and its culture, which she says is for the benefit of people who “need to know the truth”.

Here she looks at some of these myths and tells The Local why it’s time Anglos dropped this romantic, idealized view of France.

Piu Marie Eatwell: “For some reason Brits have this desire to romanticize and idealize France but we don’t do it for any other country. You don’t get books telling us how to be like the Japanese or how to dress like the Germans. France is the only country we do this for.

“It’s almost like we have this need to aspire to this ideal country where the women are all slim, the sun shines all day long and life is great. They come to France thinking the food is wonderful and they end up with a stale croissant and a watery coffee in a dingy café. Then they go to Carrefour and realize all the women don’t look like Emmanuelle Béart.

“They come over and buy a house hoping to have this lovely French lifestyle and discover they have to file all these papers with the Town Hall or the builders don’t turn up because they are on holiday or that they can’t get by without the French language, because it’s just not possible in France. You can’t get by or be accepted without speaking French, which is fair enough because if you live in a country you should learn the language.

“People need to know the truth. When you are living in France you need to know these things. Some people want to know what’s really happening. It protects them from disappointment.

“I do think French cuisine is pretty good. But you have these highfalutin Michelin star restaurants where people approach the meal as though they are eating at a temple and everyone has to worship the food. But that’s not necessarily how everyone wants to eat here.

“The French love their fast food. France is the second biggest market for McDonald’s outside of the US. There’s almost one on every corner here. I don’t think the French approach McDonald’s in the same way we do. They don’t have the same guilt complex that we have about it. For them it’s a kind of act of rebellion, like they are indulging in something which is a bit wicked.

“French food has this great historical tradition and French cuisine has had a huge influence on cuisine across the globe. But if you look at it now, it’s been overtaken by Spanish cuisine, Italian and even Japanese. The French are Europe’s biggest consumers of sushi.

“The main thing is that most foreigners base their idea of the French woman on Paris and by Paris we are really talking about the wealthy 16th arrondissement where all these beautiful petite women potter along in their high heels. But if you go out to Brittany, it’s a completely different matter. The reality is 43 percent of French women are overweight or obese, and 47 percent of the population as a whole are overweight. That’s half the population, that’s not insignificant.

“There are very big regional differences for example between Paris, the Côte d’Azur and say the east of the country, which is poorer. It’s to do with social status. In France the level of inequalities is very big. A poor woman from a deprived area in France is three and a half times more likely to be overweight than a woman from a middle class or bourgeois area. In the UK the ratio is only one and a half times more likely.

“It’s just not true that all French children are well-behaved. It’s a load of rubbish. The French school system is different from the UK system in that in France going to school is a little like going to a military academy. That may be a little harsh but it's all about discipline here and following the rules. It’s very regimented. There’s nothing necessarily wrong about the French system, it’s just different. In the UK the children are encouraged to think for themselves. The system in France is designed to produce obedient citizens whereas in the UK it is designed to create more individualistic creative people who will go out and change the world.

“The problem is that all of these books praising the French system make British people feel bad. On top of already thinking that we are all fat and can’t cook, they make us feel we can’t bring up kids either. But they don’t give the other side of the picture. French kids are being brought up to be regimented, but is that what we really want?

CLICK HERE to view the Top Ten myths about France, chosen by The Local's readers.

“There is a tendency to worship the French lifestyle without understanding the policies which underpin it and make the lifestyle possible.

“It really annoys me when people write all this rubbish about France, they push these clichés but people need to know more. People living out here and people living in the UK who come here regularly want to know the truth.

“There are many great things about France. In the book I deal with the myth that French pop music is rubbish. I look at French cinema and also French attitudes to sex, which are more liberated and a lot less weird than the British. And the view that the French don’t wash and that women don’t shave is just not true. The book is very much based on research. I have tried to keep my own views out of it.

“France is a great country. There are so many things that are great here, but not these clichés that keep being repeated. The problem is that many people have been brought up with these myths. They will say I am French-bashing, but I'm just telling the truth.”

“People must understand that just because you’re saying everything is not this romantic ideal, that it’s not a criticism. I’m not having a go at the French. I have lived here for ten years both in Paris and outside the capital, and I have three children here. I might not be French but I know what I'm talking about.”

Do you agree with the author that Anglos have a romanticized view of France that is a long way from reality? Let us know in the comments section below and we will publish some of your views.

Piu Marie Eatwell’s book They Eat Horses Don’t They – The Truth about the French is available on Amazon by clicking HERE.