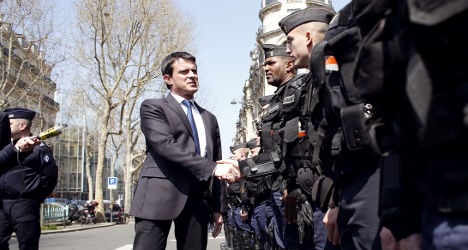 In an interview with Le Parisien newspaper on Monday, France’s Interior Minister Manuel Valls said France was faced with a “crisis of authority” following the riots earlier this month in the Paris suburb of Trappes.

The violence erupted after a man was detained for allegedly attacking a police officer who had stopped his wife for wearing a full-face veil – a practice that is banned in France – outraging many in the Muslim community. However many said it had nothing to do with Islam and was more to do with the tense relations between France's youth and its forces of order.

The riots come less than a year after the violence in Amiens, a northern city blighted by joblessness, during which 16 police officers were injured.

“We need the police to be respected. We live in a crisis of authority. The voices of parents, teachers, judges, policemen and politicians are too often disputed. The head of state has said so several times. We must restore complete authority,” he said.

While insisting on his “respect for the country’s second religion” which has an estimated 5 million followers in France alone, Valls told the Le Parisien: “Islam in France is still too divided, it must be better organized and be stronger.”

When asked if he thought France’s so-called “burqa ban”, which has banned women from wearing full-face veils in public since April 2011 posed any problems, Valls was defiant: “No! This law, which I voted for is emancipating for women,” Valls said.

“It must be firmly applied. The checks must be carried out indiscriminately with respect to the rules and the people.”

Valls, who since taking up his role as Interior Minister has impressed the public with his tough talking approach and has even garnered fans on the political right in France. His no-nonsense approach to security led him to be dubbed as the "Sarkozy of the left" in a nod to the former president's similarly hard stance on crime.

His popularity has led many commentators to consider whether he could be a future Prime Minister under President François Hollande or even a future socialist head of state.

When questioned about a recent survey in which almost half of French people said they could see the Interior Minister as a future Prime Minister, Valls played made sure he did not rock the boat.

“I’m Minister of the Interior and, while I’m at the heart of Jean-Marc Ayrault’s government I want to show that the left is in the best position to protect the French [people]," he said. "I devote myself entirely to this demanding and passionate task.”