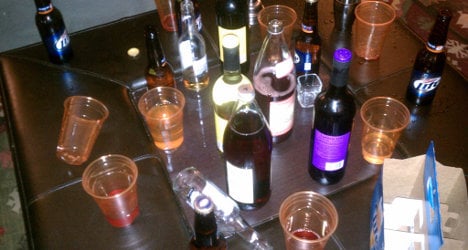 Binge drinking – or the practice of consuming vast quantities of alcohol in a short space of time – now has an official French translation: “beuverie express”.

The phrase, which literally means “fast drinking”, was given the seal of approval on Sunday by the General Commission of Terminology and Neology, linked to France's Ministry of Culture.

Earlier this year The Local revealed the Commission were concerned at the overuse of the Anglo term "Binge drinking" and had come up with a "beuverie express" as a possible replacement. On Sunday, it became official when it was published on its website.

The phrase "binge-drinking" was one of a number of works and terms the Commission were seeking to outlaw by replacing them with Gallic alternatives.

The creation of a French word for "binge drinking" is also timely as booze culture especially among France's young people is changing, with more and more youngsters adopting the more Anglo-Saxon culture of drinking to excess on a night out.

Although the term “binge drinking” originated in Britain, the problem is becoming increasingly common in France where it is has also been known as “biture express” or “alcool défonce”, particularly among young people.

Evidence taken from a number of reports and studies suggest the culture is growing. This is backed up anecdotal evidence. The manager of an Irish pub in Paris recently told The Local that it was "just like running pub back home now," referring to how drunk the young French people would get.

In May, a report in the ‘Bulletin Épidérmologique Hebdomaire’ (Weekly Epidemiological Bulletin) suggested that French teenagers are now turning to alcohol at an earlier age and in increasing numbers.

One large poll found that 59 percent of 11 to 12-year-olds had admitted to drinking alcohol. Furthermore, one in six 11 to 14-year-olds had been drunk at least once – a figure that rose to 60 percent among 15 to 17-year-olds.

A recent study – by France’s Observatory on Drugs and Addiction and the National Institute for Health Education and Prevention – found that “repeated drunkenness” among young women had doubled in just the five years up to 2010.

There has been a string of recent scientific studies suggesting that France has a real and growing drinking problem among its young people.

In March, The Local reported a staggering 80 percent rise in short-stay hospital visits in the last year, mainly for alcohol-related accidents and falls, and especially among young men and women.

Not surprisingly, the French government is becoming increasingly concerned.

“Between 2005 and 2010, repeated drunkenness among young people under the age of 18 has risen from 15 to 25 percent in Paris,” Myriam el-Khomri, deputy to Paris’s mayor Bertrand Delanoë, told Le Parisien newspaper on Sunday. “This has convinced us to revise our prevention strategies.”

Already this summer, mobile teams dedicated to preventing the health risks associated with excessive alcohol consumption have been deployed to drinking hotspots in the capital, such as the Canal Saint-Martin.

In the city of Lyon authorities have tried to stem the trend towards binge drinking by banning the sale of alcohol in shops after 10pm at night.

It is not just the binge drinking of teenagers which has been making the news in France recently.

More recently, the drinking habits of a police force in the town of Cogolin in south-eastern France were placed under scrutiny after their chief was caught drunk-driving in his patrol car without a license.

Dedicated to protecting and promoting the French language from corruption – particularly English words – the General Commission of Terminology and Neology also recently urged Twitter users to replace the English word "hashtag" with the more Franco-friendly "mot-dièse".

This decree sparked an immediate tongue-in-cheek Twitter frenzy with many ridiculing the move. Reacting to the furore in an interview with The Local, Bénédicte Madinier from the French Ministry of Culture leapt to the defense of the Commission, denying that it was more "fashionable" to use English words.