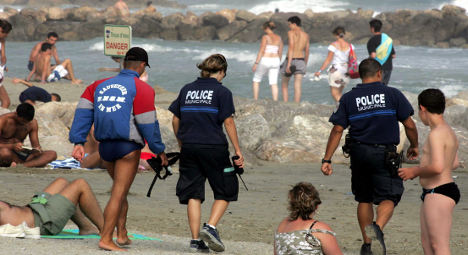 Seven people drowned in the Meditterranean over the weekend. File photo: AFP

Seven men drowned Sunday off France's Mediterranean coast due to a combination of high winds and strong currents, police and rescue services said.

One woman remained in hospital in a coma on Sunday evening, they added.

A total of 15 people have drowned across the country since Friday.

The fire department said the deaths were caused by southeast winds of up to 70 knots (around 130 kilometres per hour, or 81 miles per hour) that caused dangerously high waves and strong currents.

"People venture out to sea and can't make it back," a fire department official said. "We experience this type of event at least once per summer, but this weekend's toll is heavy, above the norm," the official said.

Four of the victims died in the water or on the beach after being pulled from the sea, and three others lost their lives in hospital.

The seven men were aged between 40 and 70, and died on six different beaches in the area.

The 50-year-old woman remained in hospital in Montpellier, emergency services said, and a 42-year-old man admitted on Friday after almost drowning also died on Sunday.

A policeman said that swimmers were routinely ignoring warnings put into place by the authorities.

"We are dealing with people who defy swimming bans. Not only do they go swimming while the flags are red, but they also can clearly see that the sea is dangerous".

The entire coast of the Herault region has been afflicted by the combination of high winds and currents, which had led local authorities to warn against swimming in such conditions on Friday after the death of a 47-year-old man.

In other deadly incidents in waters across France a woman drowned in the River Loire at Ancenis, while a three-year-old boy died at a water park in the Var region.

An 18-month old baby boy also drowned at a private swimming pool in the Haute-Garonne.

Three men also drowned in separate incidents in the Haute-Alps region of Savoie. A teenage boy died in the Muerthe river in north east France and a Romanian national disappeared after taking a swim in the Rhône river near Lyon.

Hundreds of people lose their lives each summer after drowning in the seas, rivers, lakes and swimming pools across France.