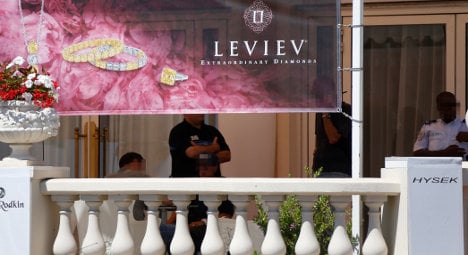 An armed man who burst into a hotel in the French Riviera resort of Cannes stole jewels worth around €103 million ($136 million), prosecutors said on Monday, in one of the world's biggest jewellery thefts.

Authorities had initially estimated the heist — which took place on Sunday in broad daylight – was worth around €40 million.

The theft is roughly as big as the world's largest ever haul of jewellery valued at around 100 millions euros, which took place in Belgium in 2003.

It is also France's biggest diamond heist, eclipsing a 2008 incident when three men stole almost every piece on display at a jewellery exhibition in Paris, a theft valued at 85 million euros.The daring heist took place in broad daylight on the promenade often frequented by the rich and famous.

The hold-up, at the Carlton Hotel on the promenade in Cannes, famous for its annual film festival, would be the second largest ever in France if the value of the jewels is confirmed.

A lone gunman, wearing a baseball cap with his face hidden by a "bandana or scarf", entered the hotel through a front entrance undisturbed as security guards patrolled the premises, according to the prosecutor's office.

"It all happened very quickly and without any violence," it said, adding that the robber, armed with a semi-automatic pistol, escaped with a briefcase containing jewels and watches encrusted with diamonds.

Police said they had not been alerted that the exhibition was taking place, which while not a legal requirement would ordinarily be standard procedure for luxury hotels such as the Carlton.

The theft has caused anger among employees and unions, who denounced lax security at the Carlton.

While not a legal requirement, alerting the police would ordinarily be standard procedure for luxury hotels such as the Carlton.

The CGT union said Monday that the Carlton had already been the victim of a jewellery heist in 1994, when a security guard was seriously wounded by a bullet.

The management at the Carlton Hotel declined to comment when contacted by AFP, saying they had "instructions not to say anything."

Huge posters of the diamonds with images of pink flowers had been affixed to the walls to advertise the jewels' presence to the public.

On its website, Leviev, which opened its first jewellery store in London on Old Bond Street in 2006, claims to have access to stones "among the most outstanding in the world."The Carlton was the location for Alfred Hitchcock's 1955 Oscar-winning thriller "To Catch A Thief", starring Cary Grant and Grace Kelly.