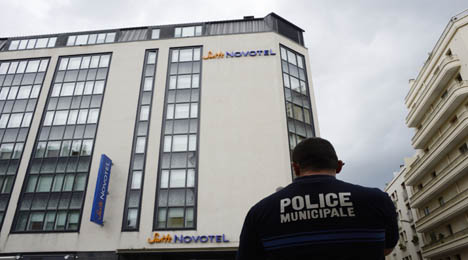 An armed man stole jewels with an estimated value of 40 million euros ($53 million) in a brazen heist in broad daylight at a diamond exhibition in the French Riviera resort of Cannes Sunday, investigators said.

The hold-up, at the Carlton Hotel on the promenade in Cannes, famous for its annual film festival, would be the second largest ever in France if the value of the jewels is confirmed.

A lone gunman managed to evade security and escape with a briefcase containing the jewels, according to the initial findings of the investigation.

Police detectives from the nearby city of Nice were at the hotel and traffic had been stopped near the scene of the heist.

The management at the Carlton Hotel declined to comment when contacted by AFP, saying they had "instructions not to say anything."

The Carlton was the location for Alfred Hitchcock's 1955 Oscar-winning thriller "To Catch A Thief", starring Cary Grant and Grace Kelly.

The diamond heist was one of the largest in recent years in France.

In the country's biggest ever robbery, which took place in 2008, three men stole almost every piece on display at a jewellery exhibition in Paris with an estimated value of 85 million euros.

And in 2012, thieves made off with four watches worth 400,000 euros belonging to football stars Souleymane Diawara and Mamadou Niang, who were in
Cannes for the festival.

The world's biggest diamond theft occurred in February 2003 in the northern Belgian city of Antwerp, when robbers got away with jewels worth an estimated 100 million euros.