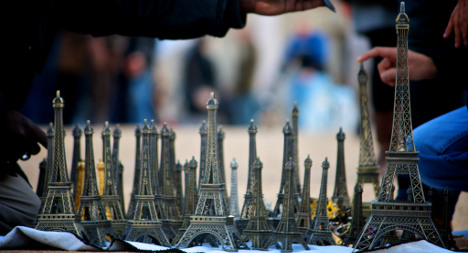 The massive stash of mini 'Iron ladies' was discovered in a warehouse in the Paris suburb of Bourget, police revealed on Thursday.

Police estimate that the objects, which were to be supplied to around 100 illegal street vendors in Paris, are worth a total of around €176,000.

On Tuesday, police also arrested two suspects believed to be at the centre of the criminal network, a 41-year-old Chinese shop manager and her brother, aged 40.

Their shop, located in the 3rd Arrondissement of the French capital, supplied around 100 sellers with souvenirs, raking in profits of more than €500,000, far more than the shop’s declared income of €33,000.

A source close to the case told French daily Le Parisien that the raid was carried out as part of wider operation aimed at increasing security for the millions of tourists who visit the capital each summer.

"This means trying to put a stop to the illegal sellers who pester tourists  around France's most famous attractions," the source said.

SEE ALSO : How to avoid the Paris Metro pickpockets