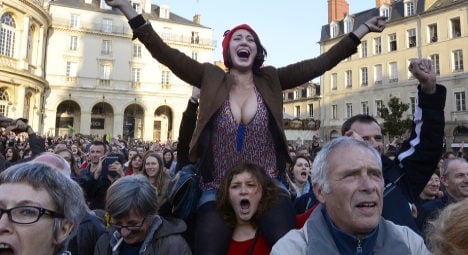 July 26 is a day of celebration in France. Photo: Damien Meyer/AFP

The carefully calculated study published by Brussels-based liberal think tank, the Molinari Economic Institute, this week revealed that Friday is the “day of fiscal liberation” meaning effectively any money they earn from now is theirs.

The annual study carried out for the whole of Europe calculates how much tax, social charges and VAT a person must pay to the state compared to what they earn on average. It then works out the equivalent of how many days a year it will take them to pay it.

France, a “champion of taxation” the study says, takes on average 56.61 percent of a French person’s salary in 2013.

This means the equivalent of months of earnings going straight into state coffers – or to be precise everyday up until Friday July 26th.

In calendar terms only the Belgians have to work longer in the year to pay off the tax man with their liberation day set for August 8th.

That might make interesting reading for actor and self-confessed tax avoider Gérard Depardieu who recently bought a house in Belgium so he could be out of reach of the French tax man.

In contrast, the British celebrated their “tax liberation” day on May 13th and Ireland’s tax payers were jumping for joy as far back as April 24th. In Germany, where the state takes an average of 52.99 percent of a person's salary "tax liberation" came on July 13 and in Sweden ((47.35%)  it was back on June 22, ten days after Spanish workers (44.45%)  had cause to pop the champagne corks.

There was some consolation for the French however. The study did show that they are among the best paid workers in Europe with an average salary of €53,647, the downside of course being that €30,371 of that is swallowed up by the state.

The authors of the study were keen to stress to serious nature of the findings and what they mean to Europe's economies.

Co-author of the study Cécile Philippe said the figures represented a “very worrying situation in France” and it looks like getting worse for the average worker next year.

“While many of our neighbours are beginning to ask themselves questions about the counter-productive impact of austerity policies, the French authorities are talking about increasing taxes in 2014,” she said.

“It is like the government thinks it can pay off the deficit simply by raising taxes. It is like they are in denial. Examples, both from France and abroad, show us that tax increases depress activity and further delay the prospect of a return to balanced public accounts.

“A sustainable solution to the current crisis lies in a reduction of spending and a rethinking of public policy.”

James Rogers, who co-authored the study, warned that the figures were based purely on payroll taxes and a conservative estimate of VAT; they did not take into account other taxes many French workers are paying.

"If you buy a pint of beer, a packet of cigarettes or a litre of petrol, most of what you pay is tax. French people who buy these things regularly are working well past the 26th of July to pay taxes."