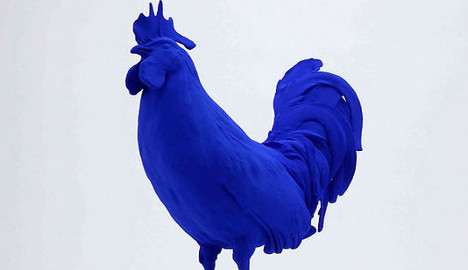 The giant blue coq that is ruffling feathers in London. Photo: Katharine Fritsch

The fiberglass statue of the classic symbol of France was installed on the famous fourth plinth underneath Nelson’s Column in Trafalgar Square, London on Thursday.

But some on the British side of the Channel had previously suggested the audacious piece of art would have the war hero Nelson – who defeated the French fleet at the Battle of Trafalgar during the Napoleonic Wars – turning in his grave.

Among the opponents of the giant coq, which is reminiscent of Footix – the 1998 World Cup mascot – is the Thorney Island Society, a charity set up to defend Britain’s heritage

They have described the work of art as “completely inappropriate”.

Artist Katharina Fritsch, however, has dismissed the criticism, insisting the rooster “is a symbol of renewal, revival and strength”.

She also hailed it as "a victory for feminism".

Despite the criticism, the artwork was approved at a council meeting and will stand on the fourth plinth until February 2015.