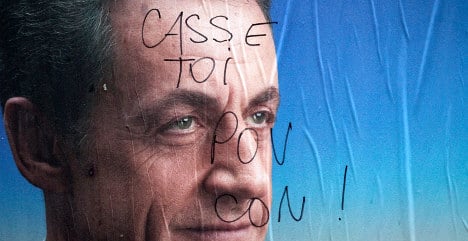 "Get lost you sad idiot" former President Nicolas Sarkozy was clearly offended by his own remarks. Photo: Joel Saget/AFP

What can an ordinary citizen get away with saying to the French president without being hauled before a court?

Well, from Thursday they will be able to say a whole lot more including something along the lines of “get lost you sad idiot” if they so desire.

It comes after the country’s Senate confirmed a change in a law dating back to 1881 which had forbid anyone from offending France’s head of state. At one point it had been punishable by up to one year in prison.

The change in law follows a landmark European court ruling in favour of freedom of speech in deciding France was wrong to convict a member of the public who had publicly offended the then French President Nicolas Sarkozy in 2008.

In August that year, leftist activist Hervé Eon had stood before Sarkozy during a presidential visit to Laval, in western France, brandishing a sign bearing the words “Casse-toi, pov’con”, which means “Get lost you sad idiot.”

Eon did not pluck the insulting phrase from thin air, of course. “Casse toi, pov’con,” which was also translated in the ECHR ruling as “Get lost you sad prick,” was the same one Sarkozy  himself had infamously used to rebuke a member of the public, who had refused to shake his hand at an event in Paris earlier that year.

But the president’s guards did not see the irony and Eon was immediately taken in for questioning. He was subsequently convicted of ‘causing offence to the chief of state’ and fined €30.

CLICK HERE FOR TEN OF THE BEST FRENCH INSULTS (Warning! – not all are appropriate to say to the president)

After an unsuccessful appeals process within France, Eon was finally vindicated in Strasbourg, when the court found his punishment by the French government had been “disproportionate.”

France had violated the man’s freedom of expression, the ECHR ruled saying the criminal penalties handed down by Paris were “likely to have a chilling effect on satirical contributions to discussion of matters of public interest.”

The French should still be careful what they say however as President will be still be able to sue for defamation or slander if they can prove it. It can be punishable by a fine of up to €45,000.