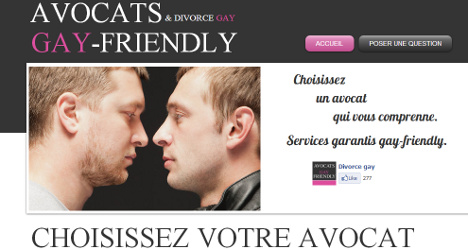 Gay marriage and adoption may now be legal in France, but the country still has a long way to go before it can wipe out gay discrimination as a whole, according to Stéphane Cola, the founder of AvocatsGayFriendly.fr, a site that lists gay-friendly legal services.

Cola says such services are in great demand, pointing out that around 10,000 fruitless Google searches are made every month for “gay-friendly lawyers” in France.

While a recent study carried out by the Association for Assistance and the French Federation of LGBT Centres shows that the majority of gay people are treated well by health workers, 30 percent of women and 27 percent of men said they were afraid of admitting they were homosexual or bisexual.

“When we know we can find a gay-friendly lawyer we are more encouraged to assert our rights,” Cola told French daily Le Figaro on Wednesday.

After all, adds Cola, “the first thing a lawyer or a doctor will ask is ‘Tell me everything!’ But if you’re inhibited, you may get a bad diagnosis!”

Already, Cola’s site has around 100 lawyers listed and offers users the chance to find a lawyer in their selected region. It was initially set up to catch the "first wave" of gay divorces following the change in the law in May.

“Around 70 percent [of  the lawyers] are heterosexual," said Cola, “but are open-minded enough and have experience [working] with homosexuals.”

France is split in two

He denied, however, that the website was an attempt to isolate the gay community.

“It’s not about closing off the community. All minorities protect themselves by creating tools of solidarity.”

And the possibilities don’t stop there, says Cola. “Gay doctors” and “gay-friendly doctors” are even more popular search terms, with around 14,000 searches a month, he claims.

By September Cola also expects to have drawn up a list of so-called “gay-friendly doctors”, too.

But, judging from his website, some regions don’t appear to be as “gay friendly” as others.

“France is cut in two vertically, the mid-west having much less than in the east of the country,” said Cola. “At the moment, for example, we don’t have anyone in Brittany. But I hope that from now until the end of the year we will manage to fill the country.”

Florent Berdeaux-Gacogne, a specialist in family law who is listed on the website told the paper that he had already seen an increase in cases involving same-sex parents since the law legalizing same-sex marriage and adoption was enforced on May 18th.

In particular, he anticipates that same-sex divorce may soon pose new problems, particularly when children are involved. “Until now, the judge ruled in favour of the child going into the care of its mother. But when there are two fathers or mothers, it must be examined according to new criteria.”

The website is not the only business in France to take advantage of the legalization of gay marriage.