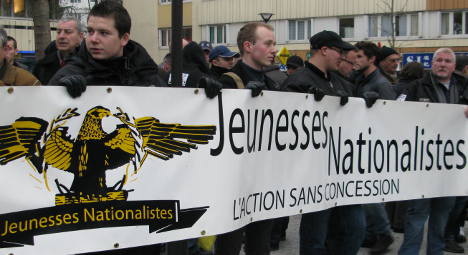 Members of the now banned Jeunesses Nationalistes (Youth Nationalists) line up at an anti-gay marriage march earlier this year. Photo: The Local

France banned two extreme-right groups on Wednesday who were active and sometimes violent during anti-gay marriage protests and have been accused of glorifying the country's war-time collaboration with the Nazis.

The dissolution of Nationalist Youth and the "Oeuvre francaise" comes two weeks after the government disbanded three other similar groups implicated in the death last month of a left-wing student in a Paris street brawl.

The death of 18-year-old Clement Meric at the beginning of June sent shockwaves across France amid concern over the rise of extreme-right groups that some say are becoming increasingly violent and brazen.

Interior Minister Manuel Valls on Wednesday described the "Oeuvre francaise" – founded in 1968 – as "an association that propagates a xenophobic and anti-Semitic ideology, racist and revisionist theories, which glorifies collaboration and the Vichy regime."

Pierre Sidos, who founded the association, is the son of a man who was executed in 1946 for collaborating with the Nazis during the Second World War under the aegis of France's Vichy regime, which cooperated with Adolf Hitler.

Valls said the organisation – whose red, white and blue logo looks like a gun target – "is organised like a private militia with training camps of a paramilitary nature."

Valls said Nationalist Youth, the other organisation to have been banned, "propagates hate and violence, glorifies collaboration, pays tribute to militiamen or to Waffen SS (the armed wing of the Nazi party), with some of its members also (doing) Hitler salutes.

The group is close to the "Oeuvre francaise".

The French government has disbanded far-right groups like these before, but new ones spring up almost immediately.

In a tweet Wednesday, Nationalist Youth leader Alexandre Gabriac said: "To believe that disbanding our associations with a piece of paper will stop our determination and our progress is pure fantasy. The future is ours."

Far-right groups were accused of inciting violence in huge protests this year against France's anti-gay marriage bill, which became law in May