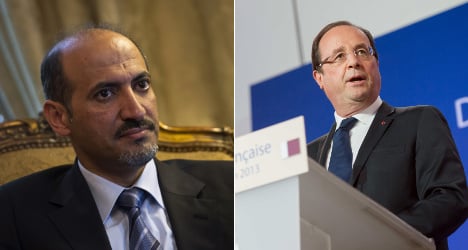 Syria's opposition leader and the rebels' military chief said Tuesday they would ask France for various forms of assistance including military aid to back up the forces fighting the regime of President Bashar al-Assad.

"This is one of the goals of our visit among other issues," new opposition chief Ahmad Jarba told reporters after meeting members of the French parliament's foreign affairs committee at the start of a two-day trip.

Free Syrian Army chief General Selim Idriss added that the opposition was "working with our European and American friends to obtain technical, medical and humanitarian assistance and, we hope, also weapons and ammunition" as the rebels did "not have enough" weapons.

Jarba, accompanied by Idriss and other opposition leaders, was to meet President Francois Hollande on Wednesday.

It was Jarba's first visit to France since he was elected head of the main opposition Syrian National Coalition (SNC) on July 6.

He said Hollande's invitation was proof of France's interest in Syria's fate.

After France, Jarba was to head to New York for meetings at the United Nations.

Britain said the 15-nation UN Security Council, including Russia and China, would hold its first meeting with the SNC leadership on Friday.

The United Nations has been told of 13 alleged chemical weapons attacks in Syria, a top UN official said ahead of talks between UN experts and the Syrian government.

The two experts arrived in Beirut on Tuesday and were expected to travel to Damascus Wednesday.

Robert Serry, the United Nations envoy on the Middle East peace process, told the Security Council that UN leader Ban Ki-moon remains "gravely concerned" about reports of the use of chemical arms in the 28-month-old conflict.

French officials said talks with the opposition were also being planned in London and Berlin.

A French diplomat said Idriss was expected to press rebel demands for Western arms, including anti-tank and anti-aircraft missiles.