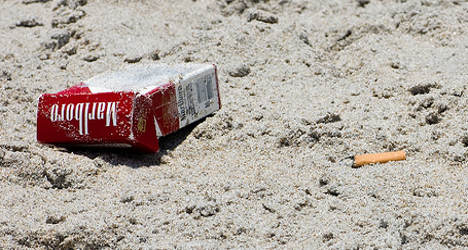 Will smoking soon be banned on all French beaches? Photo: Linda/flickr

In an interview with French weekly La Journal de Dimanche  (JDD) on Sunday Touraine said she was looking into extending the smoking ban to more public spaces, especially ones frequented by children.

“Is it normal for mothers, fathers or nannies to smoke in a public park where children play,” Touraine told the JDD.

The minister wants to see smoking, which is already banned in work places and cafes and restaurants in France, made illegal in parks, beaches and in front of schools.

Last year the may of Nice  took the step of banning smoking on one of the Riviera resort's beaches and although some local officials at coastal towns in Brittany and Normandy have followed suit in recent months, the ban is far from being widespread.

“I want towns and cities to move in this direction through discussions and create non-smoking spaces, whether parks, university campuses or beaches,” she said.

The announcement is Touraine’s latest move in a drive to crack down on smoking.

Earlier this year she confirmed that electronic cigarettes would be subject to the same laws as traditional tobacco, meaning it would be illegal to 'smoke' them in cafe and restaurants and their use would be restricted to over 18s. The law was provoked by fears that e-cigarettes could encourage young people to become addicted to traditional cigarettes.

Touraine is also considering banning smoking in cars – an idea that was put forward by Socialist Party Senator Yannick Vaugrenard to avoid passengers, especially young ones, being harmed by passive smoking.

However Touraine’s statements on Sunday have not been welcomed by some.

Yves Bur Mayor of the town of Lingolsheim in eastern France, who himself is an anti-smoking campaigner said: “These announcements create good feelings but do not replace a comprehensive policy to fight against smoking.

“We would like a more coherent overall policy that is more aggressive both in terms of the price [of tobacco] and the measures taken to help smokers quit and to deter young people,” the mayor and former MP for France’s UMP opposition party added.