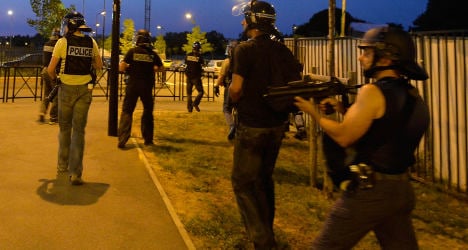 French riot police out on the streets of Trappes. They will remain as long as it takes, say the interior minister. Photo: Miguel Medina/AFP

France's interior minister Manuel Valls visited the police station in Trappes on Monday, after a weekend of violence which saw rioting youths clash with riot police.

Valls told RTL radiio earlier on Monday that the violence had been "contained" after only minor incidents on Sunday night in Trappes and surrounding areas. Two people were arrested on Sunday.

"There have been incidents in Trappes, Guyancourt and to Montigny-le-Bretonneux, where there were two arrests. I think the situation is contained," said the minister.

On Sunday Valls vowed that security forces would remain in place "as long as necessary" until order had been restored.

Valls told French radio he would keep in place "a significant police presence until a lasting calm is restored" in and around the satellite town of Trappes, south-west of Paris.

The heightened police presence appeared to work with a lower levels of violence on Sunday evening compared to the previous two nights.

Police fears that the violence seen in Trappes would spread to neighbouring areas on Sunday evening were by and large allayed.

In the town Trappes a crowd gathered once again near the police station in the early hours of Monday morning. After a firecracker was thrown at officers riot police quickly moved in to disperse the group.

It had been a different story 24 hours earlier when police made four arrests in the region as they came under a hail of projectiles and rioters burned some 20 vehicles in Trappes and surrounding areas.

The violence began on Friday evening when some 250 youths gathered in Trappes and hurled stones at police who responded with tear gas.

A 14-year-old boy suffered a serious eye injury in the clashes and several police officers were also hurt.

The unrest was sparked by an incident on Thursday when an officer stopped a woman wearing a veil.

During this inspection, the woman's husband attacked and reportedly tried to strangle the officer, said prosecutors.

However, Muslim groups accused the police of "provocation".

France's Collective Against Islamophobia in France (CCIF) has denounced the "strong arm" action of the police, which they said was "violent and provocative".

On its website CCIF published a statement made by the woman in which she details her version of events when police pulled her aside.

"I turned and I saw my husband hold on the ground by two policemen who were putting him the handcuffs.

"Once in the police car, they yelled at us like we were animals. They threatened my husband:“What are you gonna do now, uh! Bastard!” with their clenched fists."

"Once we arrived at the police station, people called me “ a ghost” (because of the full-veil)."

In its statement on the website CCIF added: "We ask the police forces to fulfill their mission to protect the population, without intimidation or provocation."

Various  politicians from France's right wing parties have blamed the veil riots on a lack of integration and said the Socialist government has done nothing to help.

Marine Le Pen, head of France’s far right National Front party said “These kind of riots have been increasing for years, both under the UMP and Socialist governments. The French Republic has too weak a hand: due to the laxity of various governments it is losing its power struggle with the thugs, the Islamists and the ringleaders,” said

Valls said he did not doubt "for an instant" that the police officers acted with respect towards the woman when conducting their check.

Since April 2011, France has had a ban against full facial veils, outraging many in its Muslim community.

Violations are punishable by a fine of up to 150 euros ($200) or mandatory citizenship training.

Authorities say about 300 women were caught breaking the veil law in the first year it was in force.

A similar outbreak of unrest occurred last month when authorities stopped a 25-year-old woman in Argenteuil, a suburb north-west of Paris, who was wearing a full-face veil, or niqab.

An angry crowd gathered and police fired tear gas and rubber bullets to disperse them.