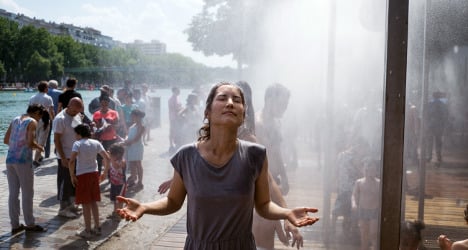 A woman cools off on water sprays on Sunday during the 12th edition of Paris-Plage. Photo: Fred Dufour/AFP

The Provence region in the south east and south-western France will get the brunt of the scorching weather, with temperatures reaching between 35°C and 36°C  on Monday.

But with Paris and Lyon expected to see highs of 35 °C it will likely fell hotter in the busy cities. Monday could be a day to avoid the Paris Metro.

Every time France is hit by a heatwave it triggers memories of the summer of 2003 when 15, 000 people, mostly elderly, died as a result of the sweltering conditions.Following that deadly summer a “plan canicule” (heatwave plan) was created to avoid a repeat of the tragedy.

Although the conditions are not forecast to be so severe this year authorities in France are on alert.

France’s Health Minister Marisol Touraine sought to reassure the French public telling weekly newspaper Journal de Dimanche that: “It’s not just because there is an effective ‘heatwave plan’ that people, especially politicians, should forget about everyday precautions we can take,” stressing that she would remain “very vigilant”.

Touraine added that France’s elderly population are not the only ones at risk urging “all those who work outside to protect themselves against periods of intense heat”.

Michèle Delaunay, the minister responsible for France’s elderly, said on Friday that the heatwave plan had “largely progressed” since the deadly heatwave of 2003.

“But everyone must feel responsible for the outcome if the heatwave lasts for many days,” she added, urging people to knock on the doors of their elderly neighbours.

Philippe Métayer, a spokesman for the country's weather service Meteo France urged the fragile, ill and elderly people, as well as young children to avoid exerting themselves during the hottest periods of the day.

People are advised to drink water regularly, even when not thirsty, in order to remain hydrated. It is also wise to avoid any physical exersion and try to cool down as often as possible by taking cold showers.

SEE ALSO: Looking to keep cool in Paris this summer? Check out The Local's Ten Things to do in Paris on a shoestring this summer.

There was no sign of anyone complaining about the heat on Saturday in Paris as the annual artificial beach party “Paris Plages” opened for business for its 12th year running.

“We’ve had a preposterous winter that lasted six months and no spring at all…We’ve been constantly cold and had to turn up our heating so we’re not going to complain after eight or ten days of heat,” one Paris beachgoer told French daily Le Parisien this weekend.

However the heat has proved problematic for France’s main train operators.

On Sunday Le Parisien reported that train operators RER and SNCF were subject to speed limitations in Ile-de-France, the northern region of Picardy and the western Pays de la Loire region, which resulted in numerous delays.

The high-speed TGV rail service was also delayed, although the heatwave is not thought to be the sole cause.

On Monday Airparif, a company that analyzes air pollution, has issued pollution warnings in Paris’s surrounding Ile-de-France region. As a result, the capital’s police force has warned children and those sensitive to the heat to avoid intense physical activity and urged motorists to reduce their speed.

As well as the heat and pollution the French were also being warned about mosquitoes, whose numbers have swelled under the baking summer sun.

According to the website “Vigilance Moustiques” there are three times as many Mosquitoes in France than in June, leaving 46 departments in France on “Orange Alert”.

Are you enjoying the heatwave in France? Leave a comment below or send in your pics to [email protected] and we'll include them in our gallery.