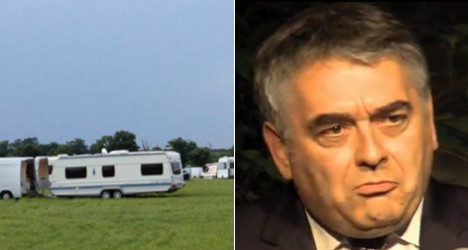 The field taken over by travellers where MP Gilles Bourdouleix was alleged to have made his comments about Hitler. Photos: Screen grabs from YouTube.

Prosecutors in France opened a preliminary criminal investigation on Tuesday into French MP Gilles Bourdouleix from the centre-right UDI party, after he allegedly suggested "Hitler did not exterminate enough" Roma during the Holocaust.

He is alleged to have made the shocking remarks when he was involved in a heated exchange with a French traveller community, who has set up camp in his town.

Local prosecutor Yves Gambert said his office had opened a probe into Bourdouleix's, who could now face charges of "defending a crime against humanity"

After the National Front's Jean-Marie Le Pen landed himself in trouble recently for calling the Roma community "smelly" and "rash-inducing, and the mayor of Nice Christian Estrosi branded the same community "criminals" in a recent outburst, Bourdouleix the MP from the Maine and Loire region of western France, has become the latest to cause offence when talking about a travelling community.

The MP went to meet members of a travelling community who had just set up home in field in the commune of Cholet, where he is also deputy mayor.

'Most barbaric act of the 20th century'

Accompanied by a police escort, the mayor had gone to confront the community on Sunday night, all of whom belong to the evangelical mission Vie et Lumière.

After asking them to move on the atmosphere reportedly became a little tense and several members of the travelling community apparently made Nazi salutes in the direction of Bourdouleix.

It was then that he reacted. According to French regional paper Le Courrier de L’Ouest he was heard making  the comment: “maybe Hitler didn’t kill enough” in apparent reference to the extermination of around 250,000 Gypsies at the hands of the Nazis.

His words have provoked a torrent of condemnation from political parties across France but Bourdouleix, who denies making the remarks, may have to save his explanations for a French court.

If he is convicted of justifying a crime against humanity he could face up to five years in prison.

"Nothing can justify or excuse an elected official of the Republic making such a reference to the most barbaric act of the twentieth century," said the local prefecture said in a statement.

"These comments are a defence of crimes committed in the Second World War, a defence of Nazism and coming from a mayor, from a member of parliament, it's completely intolerable," he said on TV channel i-TELE.

Prime Minister Jean-Marc Ayrault said Bourdouleix's comments were "not worthy of an elected representative" and were "punishable by law".

For his part the MP, when questioned about the comment, was heard to justify it by saying: “You compared me to Hitler, do you think that’s nice?"

Undeterred, the deputy allegedly went on to accuse the community of incestuous behaviour. “The other day, they called me a paedophile. Even though half of their children are from fathers and grandfathers," he said.

Following the publication of the article, Bourdouleix accused the paper of “having totally skewed" his words and said he would “lodge a complaint against the paper, the journalist and all the media outlets who repeat this false quote”.

His real comment, which had apparently been uttered under his breath, he claims, was in fact: “If it was Hitler, he would have killed them all”.

Fabien Leduc, the journalist who recorded the quote has since published an audio recording of the alleged comment online.  Prosecutors have also ordered that the recording of the remark be analysed to see if it was altered.

'Nothing justifies these remarks'

The recording appeared to have convinced the UDI’s party leader Jean-Louis Borloo, who was swift to condemn the alleged comments.

“Whatever the real and unacceptable provocations the Deputy Mayor of Cholet, Gilles Bourdouleix was subjected to, nothing justifies the remarks apparently made by him, if the recording put online by the Courrier de l’Ouest this afternoon is to be believed," said Borloo.

He added that the matter would now be passed on to the UDI’s executive committee.

Jean-Christophe Lagarde, the secretary general of the UDI party, which was formed in September 2012, has suggested that Bourdouleix must be expelled from the party.

In two tweets Lagarde said: "The words of Bourdouleix, even made in the heat of the moment, were intolerable and incompatible with the values of the UDI."

He added: "The only possible sanction is his exclusion from the UDI which should be adopted by the executive committee next Wednesday."

The Roma and France

France has a policy of systematically dismantling illegal camps and repatriating Roma of Bulgarian and Romanian nationality — a policy whose legality has been questioned by the European Union, the United Nations' human rights arm and other watchdogs.

The European Association for the Defence of Human Rights says almost 12,000 Roma were evicted from camps across France last year, 80 percent of them forcibly.