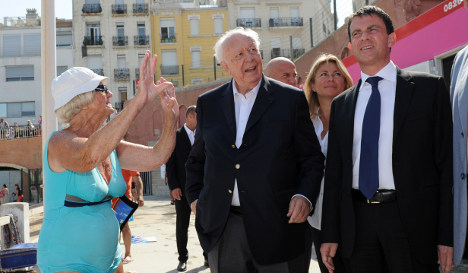 The teenager suffered an eye injury after being shot in the face on Friday evening. It is not yet known who fired the shot.

The youth was in hospital on Saturday. Several police offers were also injured.

Some 250 youths had gathered in the suburb of Trappes on Friday evening throwing stones at police who responded with tear gas.

The 14-year-old was hurt during an "intense phase" of violence, official Erard Corbin de Mangoux said.

Trouble had started around 8:30 pm and carried on sporadically through the night until 2am.

It had been sparked by an incident on Thursday when an officer stopped a woman wearing a veil.

During this, the woman's husband attacked and apparently tried to strangle the officer, according to Versailles prosecutor Vincent Lesclous.

This version was disputed by the Collective against Islamophobia in France, who said trouble started after police "provocation".

France introduced a law in April 2011 banning the wearing of full face veils in public places.

Since that time more than 700 inspections have been carried out by police.

Interior Minister Manuel Valls, who was in Marseille, said: "To attack the police, institutions, public goods makes no sense, does not solve any problem and is unacceptable."

The president of the Observatory against Islamophobia, Abdallah Zekri appealed for calm.