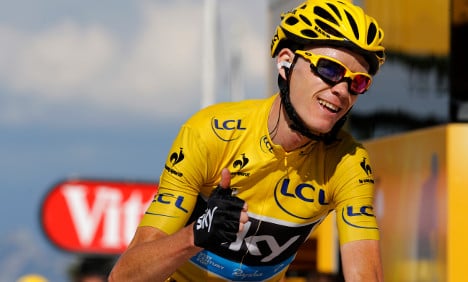 Froome, who finished runner-up in 2012 on his way to helping Sky teammate Wiggins make history, heads into Sunday's final stage with a 5min 03sec lead on Colombian sensation Nairo Quintana.

The final stage of the world's biggest bike race is traditionally not contested by the contenders in the race's general classification, whose prize is the fabled yellow jersey.

Instead, the sprinters are set to do battle for the final stage victory of the 100th edition with Britain's Mark Cavendish, of Omega-Pharma, aiming for his fifth successive victory on the world famous Champs Elysees in Paris.

After a final day of climbing on the race Saturday, when race debutant Quintana claimed his maiden stage win, moved up to second overall and claimed both the white jersey (best young rider) and polka dot jersey (best climber), the dream Froome first had while riding a mountain bike on dirt trails around Nairobi was slowly sinking in.

"The journey I've taken to get here, from riding on little dirt roads on a mountain bike back in Kenya to be here in yellow on the Tour de France, it's difficult for me to put into words," he added.
"This is an amazing feeling."
Froome, who moved to South Africa as a teenager and took a British racing licence only in 2008, has been regarded as a potential multiple winner in cycling's marquee Grand Tours since finishing second on the 2011 Tour of Spain.

He followed that result with a runner-up place on the Tour de France last year as he played a crucial role in Wiggins securing the sport's top prize.

Wiggins did not participate in this year's Tour after suffering from illness in the wake of his retirement from the Giro d'Italia following a crash.

Froome, however, had been the form stage racer in the peloton this season, winning the Tour of Oman, Tirreno-Adriatico, Criterium du Dauphine and Tour of Romandie stage races.

He struck a first blow on stage eight of this year's Tour de France when he attacked several kilometres from the finish to win atop Ax-Trois-Domaines in the Pyrenees.

After a second place finish on the stage 11 time trial, where he stretched his advantage further, victories on the Mont Ventoux (stage 15) and the stage 16 time trial to Chorges virtually sealed his triumph.

It left Froome with a virtually unassailable lead of 5:11 over former two-time champion Alberto Contador going into Saturday's final day in the hills.

Despite appearing to have the legs for a third mountain-top stage win as he forged ahead of Contador with Quintana and Spaniard Joaquim Rodriguez, the culmination of three, intense weeks of racing meant that emotions, and not his legs, took over.

"With about two kilometres to go when I was with Quintana and (Joaquim) Rodriguez I started thinking, 'two k's to go now, I've got five minutes, this is it, it's pretty much wrapped up now," said Froome.

"It was overwhelming and it actually became quite hard to concentrate in those last two k's."

A year after a hugely successful London Olympic for Froome and Wiggins, who won bronze and gold respectively in the time trial, Froome said: "I'd like to think it's been a great summer of sport for Britain."