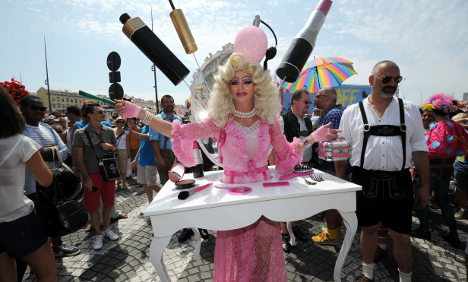 Under a banner proclaiming "Europe marches towards equality", they made their way from the city's old port to the beach amid celebrations for the beginning of the 10-day festival devoted to the lesbian and gay cause.

The marchers were backed by several left-wing figures from France and delegations from abroad, including some from New York, Montreal and Norway.

A group of 50 marchers from Munich paraded in the traditional Bavarian dress of breeches and embroidered shirts and filed along behind their muse "Franca", a drag queen dressed in pink.

There were also 20 floats from various organisations including the lesbian and gay staff from the French train operator, SNCF, and the LGBT association of police and gendarmes.

Marseille Europride has been hit by several problems including cancelled concerts, and foreign delegates who received their invitations too late to get a visa. Initially, up to 130,000 people were expected to attend the event.