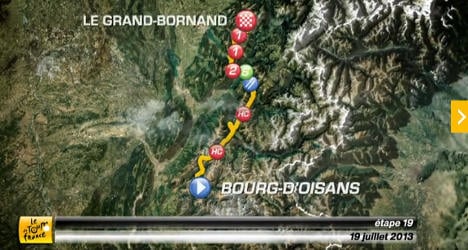 The peloton may already be exhausted and eager for this year's Tour de France to finish, but after the agony of Thursday's double ascent of L'Alpe d'Huez, things are not about to get any easier on Friday's 19th stage.

The second day in the high Alps is a 204.5-kilometre ride from Bourg-d'Oisans north to Le Grand-Bornand and, while there will be no mountaintop finish this time, the first half of the stage does feature two unclassified climbs.

First up is the 21.6-kilometre long ascent of the Col du Glandon, followed by the 19.2-km Col de la Madeleine.

And that is not all, for there will be three more climbs to come before the finish – two of them classified as category one – with the last, the Col de la Croix-Fry, coming less than 15 kilometres from the end.

The race for the yellow jersey may appear to be over thanks to Chris Froome's convincing lead, but there is plenty more still at stake in Friday's stage.

It remains to be seen if Alberto Contador and Team Saxo have any more attacks up their sleeve after failing time and again in their attempts to close the gap on Froome in the general classification.

Contador is also now unlikely to receive much help from Spanish team Movistar, who will be working hard to bring Nairo Quintana closer to completing a dream debut Tour.

The Colombian climber is on course to win the white jersey for the best young rider but is also eager to catch Froome in the race to win the polka dot jersey for the King of the Mountains and ensure that he finishes on the podium in the general classification.

Le Grand-Bornand will be welcoming the Tour for the sixth time. The last time a stage finished here came in 2009, when Luxembourg's Frank Schleck triumphed.

Friday's stage is scheduled to start at 0900 GMT with the arrival in Le Grand-Bornand expected at just after 1500 GMT.