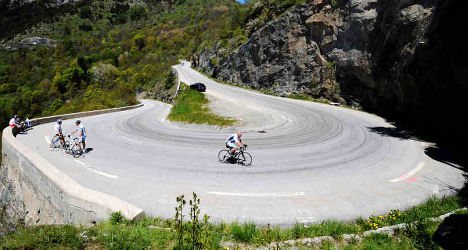 One of the hairpin bends on the mythical Alpe d'Huez. Jean-Pierre Clatot/AFP

Yellow jersey holder Chris Froome extended his lead over Alberto Contador as Christope Riblon triumphed atop the Alpe d'Huez on stage 18 to end the hosts' victory famine on Thursday.

Froome began the day with a 4min 34sec lead on Contador but on what was billed as the 'Queen' stage of the race – with six climbs on the menu — Contador's Saxo team failed to loosen the British race leader's grip.

Contador ultimately failed to respond when Froome and Australian teammate Richie Porte upped the pace on the second and final ascension of the 13.8 km climb to the summit of the Alpe.

Froome, however, risks a sanction by race officials after he required emergency supplies from Porte as he suffered a hunger knock inside the final five kilometres of the race.

Normally, feeding stops at the 20 km to go mark, and Froome — who signalled his need to his team car before Porte gave him a handful of power gels — admitted: "It was a difficult stage. When I signalled for help I needed sugar and I was thankful that Richie was there."

While Froome's lead over Contador now looks unassailable, arguably the biggest beneficiary of the day was Colombian Nairo Quintana, who finished 2:09 behind Riblon having attacked Froome and Porte in the final kilometres alongside Spaniard Joaquim Rodriguez of Katusha.

The Colombian's efforts moved him up to third overall at 5:32, just 21sec behind Contador, and within sight of a podium finish in Paris on what is his maiden Tour.

"I still haven't won a stage yet but I'm very happy with my performance today," said Quintana, who in the process tightened his grip on the white jersey for the best-placed rider aged 25 or under.

Riblon's performance, however, will be warmly welcomed by the hosts who have struggled to make any impact in the 100th edition of the race.

He began the climb over the Alpe's famous 21 hairpin bends, where thousands of fans decked in colourful costumes added colour and drama to the occasion, in the company of BMC's Tejay Van Garderen.

The American accelerated away from Riblon after only a couple of kilometres and despite taking a healthy lead the Frenchman did not give up.

Encouraged by his sporting director in his team car, Riblon finally caught sight of Van Garderen inside the final three kilometres and when he caught up with a little more than a kilometre to race he left 'TVG' in his wake.

It was Riblon's second mountaintop stage win on the race following his win at Ax-Trois-Domaines three years ago.

"I can't believe it! I didn't think I was going to catch him, it was only my sporting director who kept me going, telling me that Tejay was going to crack," said Riblon.

Stage 18's Alpe d'Huez was one of the most iconic spots in this year's Tour de France. CLICK HERE to see nine more.