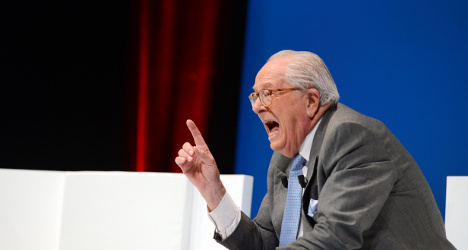 Jean-Marie Le Pen, former far-right National Front leader, has been accused of "incitement to racial hatred" after he called the Roma community "smelly" and "rash-inducing." Photo: A. Jocard/AFP

The European Roma and Travellers Forum (ERTF) has been joined by SOS Racisme and the French Union of Travellers Associations in filing a law suit against far-right firebrand Jean-Marie Le Pen , it emerged on Wednesday.

Le Pen, who founded the anti-immigrant National Front party in 1972, is accused of “inciting racial hatred” with his comments made on July 4th in Nice when he labelled the local Roma community a “smelly” and “rash-inducing” presence in the southern city.

The complaint also denounced statements by Nice mayor and centre-right opposition UMP deputy Christian Estrosi, who on July 5th labelled the Roma community “criminals” and proposed tougher measures for dealing with them, including installing video surveillance in Roma and traveller camps.

Jean Marie is not the onlymember of the Le Pen family who is facing serious accusations of incitement to racial hatred.

Earlier in July, The Local reported how Marine Le Pen, daughter of Jean-Marie and current leader of the National Front, had been stripped of her immunity as a former MEP, and could face charges of incitement to racial hatred.

In a 2010 speech before National Front supporters, she denounced the holding of Muslim prayers in the streets of France – where a dearth of mosques has forced many to pray outside – saying: "For those who like to talk about World War II, to talk about occupation, we could talk about, for once, the occupation of our territory."

Prosecutors in Lyon, where the speech took place, opened an investigation into the remarks for "inciting racial hatred," by comparing Muslim street prayer to the Nazi occupation, an historical analogy that is particularly poignant in France.