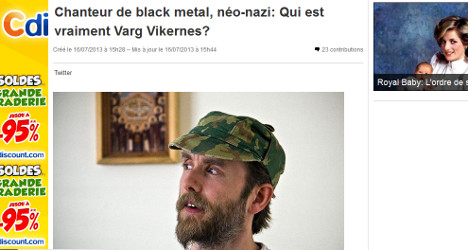 Most people in France had never heard of the man nicknamed "Wolf" (Varg) who, according to Interior Minister Manuel Valls, could have been about to carry out a “major terrorist attack”.

Following news of the arrest of the 40-year-old Norwegian neo-Nazi, the headline on many French news sites from Europe1 radio to TF1 TV was simply “Who is Varg Vikernes?”

And the question most newspapers and websites were asking on Wednesday was whether or not the black metal musician, a convicted murderer, who was linked to Norwegian terrorist Anders Behring Breivik, could really be a threat to France.

“Could he have been ready to act? It’s impossible to answer this question. And that’s why he was arrested,” a French judicial source told 20 minutes.

All talk of any terrorism threat in France in recent weeks and months has centered on the danger posed by Islamist extremists rather than Norwegian neo-Nazis.

The reaction of the mayor in the small town of Salon-la-Tour in the Correze region of central France where Vikernes lived with his French wife Marie Cachet, who was also arrested on Tuesday, sums up the surprise with which France greeted the arrest.

Mayor Jean-Claude Chauffour was inundated with questions by the media, in the hope he could reveal some more information. But he too was pretty much in the dark over Vikernes.

“No one was aware of this, not even the local gendarmerie,” Chauffour said, talking about the operation by the anti-terrorist police from the DCRI, who had been monitoring Varg for weeks.

The mayor of the small village of 700 people had spoken to the Norwegian only once when he met the couple 18 months ago.

“I mainly spoke with his wife because he doesn’t speak French very well. It was fine. We didn’t see much of them. They led a quiet life,” he added. The mayor did reveal he had noticed Vikernes had three vehicles painted in military style camouflage and that he had a “paramilitary attitude” and often wore army fatigues.

("Who is Varg Vikenes, the Norwegian Neo-Nazi arrested in Corrèze?" reads the headline on TF1 TV).

One neighbour of the couple, Yves Langoile, told AFP that Vikernes was "polite" and "appeared to be normal and nice", and close to his children.

All French news sites carried a profile of Vikernes to try to shed some light on this new “menace” to France.

Online news site 20 Minutes mentions Vikernes' appreciation of France’s far-right National Front party. In 2011 he appealed to the French public on his blog asking them to vote for the far-right party.

“Dear France, your countryside is beautiful, but only because it is still unaffected by mass immigration,” he wrote.

Asking people to vote for Marine le Pen, he added: “I live in Norway, the last Soviet state in Europe and I have no acceptable party to vote for, but you have this opportunity.”

France's move to arrest Vikernes also made headlines in his native Norway where attempts were also made to reveal more about a man who was sentenced to 21 years behind bars for murder in 1994.

"All over the world, he has a very high status as a musician and an artist. I've noticed it in China, Asia, western and eastern Europe. But his status as an ideologue varies," Norwegian author Håvard Rem, who published the book 'Native Scream' about the history of black metal culture in Norway, told newspaper Aftenposten.

"In countries that don't have a connection to migration to Europe, such as China, Indonesia and Singapore, he is a role model when it comes to looking back at original culture. He doesn't give concerts and gives very few interviews. That's how he builds up his cult status," Rem told Aftenposten.

Although it appears French intelligence services were not aware of any specific plan of attack, authorities in Paris are adamant that the musician posed a threat, describing him as a “danger to society”.

Interior Minister Manuel Valls said authorities had decided it was important to arrest Vikernes "to act before and not afterwards."

"The DCRI (French domestic intelligence service) considered that messages he had posted on the Internet expressed great violence," he said.

"The purchase of weapons and cartridges by his wife showed that a terrorist plan was possible. To know more, to know what this plan could be… the DCRI considered it was important to arrest and question him."

Under anti-terror laws in France, Vikernes can be held in custody for a total of 96 hours. Perhaps after that we may know more about whether the black metal musician really posed a terrorist threat to France.

However Varg's lawyer heavily criticised France on Wednesday saying there was not enough evidence to warrant the arrest.

"In Norway it's not enough to simply be preparing a terrorist attack. There must be a specific plan against a specific target," Norwegian lawyer John Christian Elden told AFP.

"It's also necessary to have a sufficient basis for an indictment before you can arrest anyone. In Norway he would have been summoned to answer questions, but he would not have been arrested."

The lawyer, who said he had not had any contact with his former client since his arrest Tuesday, called the charges against him "thin".

"So far it's less than the Norwegian security services have whenever they arrest Islamists and release them shortly afterwards," he said.