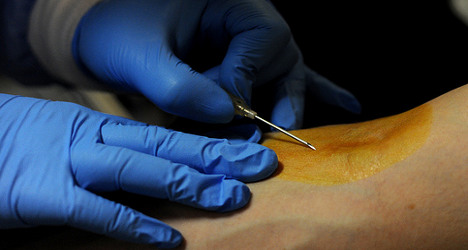 France’s Minister of Health Marisol Touraine was handed a report this week that looks set to launch a new row over gay rights in France.

Socialist MP Olivier Véran, the author of the potentially divisive report, says it is time to end discrimination when it comes to blood donors.

Veran, who is also a doctor, has recommended that the lifetime ban on homosexual male donors that was put in place in 1983 because of fears over the spread of AIDS, should now be lifted.

Rather than focus on the sexuality of the donor, the report suggests the emphasis should be on the individual risk of each donor, whether heterosexual or homosexual, in terms of whether or not their blood could be contaminated.

That view has been backed up by French gay rights organisation, "SOS-Homophobie" which has been battling for years to have the ban overturned.

The organisation’s treasurer Ludovic Saulnier told The Local on Wednesday that advances in science and a need for equality in France mean the restriction should be lifted.

“France is well behind other countries on this issue. In Spain, Portugal and Italy homosexual men are allowed to give blood and there has been no increase in risk to public health there.

"Nothing shows that allowing gay men to give blood has increased the dangers for people receiving transfusions.

“The question has to be about the level of risk and not about the sexuality of the donor. Why shouldn’t a homosexual man be able to give blood just a like a heterosexual man if the risks are properly evaluated,” he added.

Currently male donors in France are asked about their sexuality in an interview before giving blood. Anyone who says that they have been in a gay relationship at any point in their lives is automatically banned from giving blood.

The 1983 law was based on statistics that showed there was a prevalence of the HIV virus among homosexuals and the fact that the virus is not always picked up if blood tests take place immediately after transmission.

Saulnier says it is time to change this outdated view.

“Allowing homosexual men to give blood will take away the risk that people lie on the questionnaires. People who give blood are normally responsible people. They do it for the benefit of someone else and will not do it if they think they pose a risk.

For his part the MP Véran says improving the interviews and questionnaires given to donors will only enhance public safety.

“It’s not because you’re gay or that you had a sexual relationship with a man 30 years ago that you are a time bomb,” he told France Info radio.

“The ban on giving blood can be seen as discriminatory if it is not based on science,” he added.

France legalised gay marriage in May, and now SOS Homophobie says the French government has another opportunity to act against discrimination.

“We are not asking for any new rights,” Saulnier says. “We just want the same rights as heterosexual couples.

“This is about the equality. The government has made social reforms in favour of equality, and tackling the different forms of discrimination that exist should be its priority,” he said.

In South Africa, where AIDS has been prevalent, there now has to be a six-month gap between sex and blood donation. In Australia, Sweden and Japan it is a year.

In 2011 the UK also lifted a lifetime ban on homosexual and bisexual men giving blood after medical evidence said the restriction could be no longer justified. Ministers agreed that men who had not had sex with another man in the past 12 months would be allowed to donate.

France is by no means certain to follow suit given Touraine's most recent comments on the issue.

“I don’t think it’s good that there is an element of discrimination involved, but at the same time I cannot lift the ban unless I am given an absolute guarantee that it will not increase the risk for transfusions,” Touraine said in December.

According to France’s Europe1 radio the minister is concerned about the fact that in 2011, 40 percent of new cases of HIV were among gay men. However gay rights groups argue the statistics are skewed because they are based on data taken from areas where male prostitution is high or where sexual encounters are common.

SOS Homophobie simply wants the minister to reconsider her position.

“We want her to study this report and look at what has happened in other European countries. There is no reason why there should be this segregation among blood donors anymore on the grounds of sexuality,” Saulnier said.