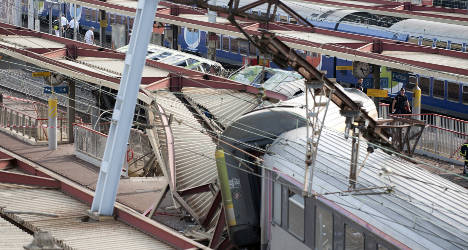 The scene of the wreckage after Friday's crash. Photo: Romain de Costa/AFP

Trains to and from Gare d’Austerlitz in Paris remained heavily disrupted on Tuesday, four days after a train derailment just south of the capital claimed the lives of six people.

According to French rail operator SNCF, Intercité trains between Paris and the south west from Gare d’Austerlitz will remain disrupted as will the RER C service which serves the Ile de France region around Paris.

On Monday there were no regional RER C trains between Savigny-sur-Orge and Brétigny in the Essonne department.

SNCF says the RER C service is unlikely to return to normal before July 22nd while repairs are made to the platforms at Brétigny, one of which was destroyed in Friday’s crash.

To try to make up for the loss of trains, SNCF have laid on around 60 buses to run a shuttle service between Brétigny and Juvisy, but commuters are still facing an arduous task to get to work and back.

“I couldn’t get on the bus at all . There was only one here,” a commuter named Nicole told Europe1 radio, who is taking around three hours to get to work.

Another commuter Catherine told French daily Le Parisien: "The driver didn't know the route. Everyone was telling him different directions. It was total chaos."

The 40,000 passengers who use the affected train line through Brétigny each day are unlikely to face a normal journey to work for a while with SNCF giving no date by which the Intercity line will return to normal.

Around 600 metres of track has to replaced after the derailment. The last of the derailed carriages was due to be removed from the station overnight on Monday.

On Tuesday the first train was scheduled to pass through the station at Brétigny since Friday’s accident. The early morning train from Paris to Orléans will only be a one-off however, with buses continuing to replace train services on the route on Tuesday.

Other rail disruptions include:

*No Intercity night trains between Paris and the south west of France until Friday 19th July.

*No trains between Paris and Madrid before Thursday July 18th

SNCF are continuing to investigate the cause of Friday’s derailment which they say was caused by a connecting bar that had come loose at a rail switch at the station.

Rail staff are currently in the process of checking 5,000 similar connections around the country. A spokesman for the operator said it would take around two weeks for all the checks to be carried out.