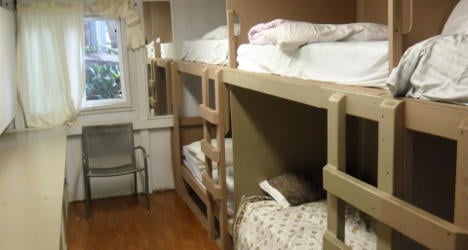 The 15-year-old girl was on a class trip to Berlin on May 28th when she left her hostel room after 10pm with a friend in order to meet up with a group of young Polish men who were staying on the same floor of their youth hostel, according to reports in the French media.

The girls then returned to the room with the men to drink vodka. It is then alleged that at least one of the girls was orally raped, the victim's lawyer told The Local.

The teenagers reported the traumatic attack to their teachers two days later, at which point the school filed a complaint with local police, who are still investigating the claims.

However, on returning to Notre-Dame de la Providence, a private Catholic school in Thionville, in the Moselle department of north-eastern France, the girls were shocked to be hauled in front of a disciplinary meeting, before being excluded.

The parents of one of the girls slammed the school's decision.

“Our daughter should be punished, but not like that. What did [the school] do on their part to prevent something like this? We entrusted our children to them,” they told l’Est Republicain.

Frédéric Richard-Maupillier, lawyer for the 15-year-old pupil, told The Local "the school has shown no sympathy for the girl".

He is convinced that authorities at the school blame the girls themselves for what happened, seeing it as an aggravating factor in their punishment, rather than a point of sympathy.

“This is a sanction that is incomprehensible and disproportionate in light of what happened,” he told French radio RMC on Tuesday.

“If there had been no assault, I’m not sure that these students, who went out past 10pm, would have been subjected to a disciplinary hearing,” he added.

“Not only are they being told that what happened to them was their fault, but they’re also receiving a very heavy punishment,” he told Le Figaro.

Richard-Maupillier also claimed that the headteacher of the school, Françoise Lallier, had refused to meet with the girl’s parents, and school authorities were not returning their calls, using the summer holidays as an excuse for not being contactable.

The 15-year-old victim, meanwhile, is said to be deeply disturbed by what happened in Berlin, and has been seeing a psychiatrist while she prepares to attend a new school this autumn.

Richard-Maupillier, however, has pledged to appeal to local educational authorities in the Lorraine region to overturn the decision.

“She is a rape victim. She cannot be allowed to develop feelings of guilt,” he told regional paper l’Est Republicain.

However defending the school's course of action headteacher Lallier told regional daily L’Est Republicain they had been expelled “for not respecting the curfew and for landing themselves in the room of four adult men, and for consuming alcohol.”

For his part, the school’s lawyer, Hervé Renoux appeared to suggest the girls were at fault for what was alleged to have occurred on May 28th, telling French daily Le Parisien, “there was an excessive consumption of alcohol which led to inappropriate conduct.”

A representative from Notre Dame de la Providence could not be reached for comment at the time of publication.