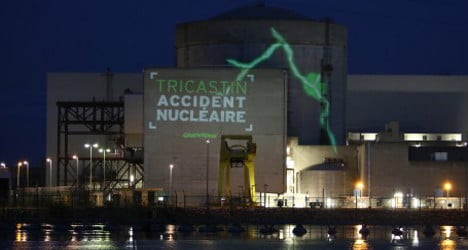 An image projected on to the wall of the Tircastin nuclear power station but Greenpeace activists. Photo: Greenpeace

Police on Monday arrested 29 Greenpeace activists who snuck into a nuclear plant in southern France, in the latest break-in by the environmental group aimed at highlighting alleged security weaknesses at atomic facilities.

The activists managed to enter the grounds of the Tricastin plant, around 200 kilometres north of Marseille, around dawn, Greenpeace and police said.

They hung yellow banners reading "Tricastin: a nuclear accident" and "Francois Hollande: president of a catastrophe?" in reference to the French president, according to Isabelle Philippe, a spokeswoman for the environmental group.

Before entering the facility, the activists also projected images inside the plant, including one showing a crack running along part of the structure.

"Greenpeace wants to point out all the security weaknesses in the production of nuclear energy," she said. "Tricastin is one of the most dangerous plants and one of five that should be closed quickly."

"It was the easiest thing in the world for the activists to enter the plant, it took them 20 minutes to get from the entrance to the top of the structures," she said.Around two dozen Greenpeace campaigners snuck into a nuclear plant in southern France on Monday, in the latest such break-in by the environmental group.

In a statement on its website Greenpeace said: “With this action Greenpeace demands that François Hollande announces the closure of the Tricastin nuclear plant, which is among the five most dangerous in France.

“Like Fessenheim the plant at Tricastin is at the greatest risk from external attack whether by nature or by man. It has, most notably, 20 cracks on the No.1 reactor vessel and is the third oldest of the French power stations.

“Like Fessenheim it is exposed to the risk of flooding and earthquakes."

Nearly four hours after the initial break-in police had arrested 21 of the activists, including French, Italian, Romanian and Spanish nationals according to the interior ministry.

Another dozen still inside the plant had been "located," said ministry spokesman Pierre-Henry Brandet.

Police said that arresting the activists was taking some time as some of them had chained themselves to structures inside the plant.

A spokesman for the interior ministry said the activists "were not able to access the plant's sensitive areas".

The activists "could not access the plant's sensitive zones, notably the command rooms," said Pierre-Henry Brandet.

"It's a media stunt that poses no security danger," he said.

He insisted that the activists, who divided into three groups upon entering the plant, "were immediately detected" and that around 50 gendarmes were deployed to arrest the remaining trespassers.

Members of the environmental anti-nuclear group have staged several break-ins at French nuclear plants in recent years in an effort to highlight what they say are dangers of atomic power and to expose security problems at the power stations.

In May 2012, an activist with the group flew into the grounds of the Bugey plant in southeastern France using a hang glider in a stunt aimed at revealing alleged security flaws. He flew over the plant, threw a smoke bomb and landed inside before being arrested.

In December 2011, nine activists snuck into the Nogent-sur-Seine plant 95 kilometres southeast of Paris. Most were quickly arrested, but two managed to evade capture for nearly two hours.

France is heavily reliant on nuclear power, with its 58 nuclear reactors producing some 75 percent of the nation's electricity. In his election campaign Hollande had spoken of reducing France's reliance on nuclear power in a move to appease the Green party members of his coalition. However since taking power Hollande has appeared to backtrack on the pledge.

Much to the anger of Greenpeace.