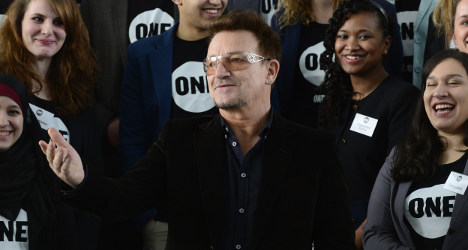 Irish musician Bono from the band U2 gestures prior to a family picture with ambassadors of the non-profit organization ONE in April 2013. Photo: John Macdougall/AFP

France is to bestow its highest cultural honour on U2 singer Bono, a government statement said on Monday.

The Irish singer will be made a Commander of the Order of Arts and Letters in a ceremony due to be held in Paris on Tuesday evening, the Ministry of Culture and Communication said.

Bono, a leading advocate of aid for Africa, founded the global anti-poverty group ONE to help fight poverty and disease on the continent.

The U2 lead singer has received numerous awards and honours for both his humanitarian work and services to music including France's Legion d'Honneur and an honorary knighthood from Britain.