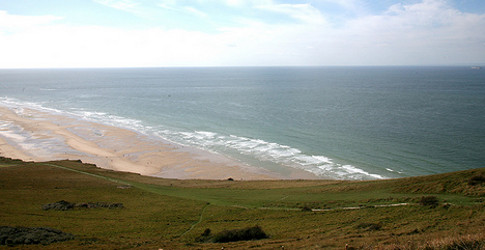 Despite rescue efforts she was later pronounced dead in a French hospital.

The woman has been named as Susan Taylor.A British woman, believed to be aged 34, died on Sunday evening after attempting to swim across the English Channel from Britain to France to raise money for charity.

At around 5:30pm French rescue officials were called out to a boat that was accompanying the British swimmer in the area of Wissant bay, near Cap de Gris-Naz, close to the French coast.

The woman has been named as Susan Taylor (pictured above), from Barwell, in Leicestershire.

Her sister broke the tragic news on Taylor's Facebook page on Monday morning.

"Whilst attempting to swim the English Channel yesterday my sister, Susan collapsed suddenly in the water. She was immediately recovered from the water and treated on the support boat.

"She was then air lifted by helicopter to a hospital in Boulonge. Susan tragically passed away.

"Thank you for your messages of support. Please respect the family's privacy whilst they come to terms with what has happened. If you would like to leave a sign of respect please feel free to donate to her fund raising page."

According to French regional newspaper La Voix du Nord her support team on the boat had radioed urgently asking for a defibrillator.

The weather conditions were not bad in the area with the wind blowing around 9km/h and the water temperature at 15°C according to French maritime authorities.

According to her online charity fundraising page, Taylor had raised almost £3,000 ($4,500) for the Rainbows children's hospice, and a further £2,200 for Diabetes UK.

Donations continued to pour in after her death.

On the website, Taylor described swimming the Channel, one of the busiest shipping lanes in the world, as akin to scaling Everest.

"Less than 1,000 people have completed the 21-mile (34-kilometre) cross-Channel swim, whereas over 3,000 have conquered the world's tallest mountain," she wrote.

"Only one in ten people who train for the Channel actually complete it."

The Local understands Taylor was trying to cross the Channel under the guidance of the Channel Swimming Association, one of the two official British organizations who can officially authorize the cross-Channel swims.

The other organization is the Channel Swimming and Piloting Federation (CS&PF).

Secretary of the CS&PF Kevin Murphy was shocked and saddened to hear of Taylor's death on Monday.

"I was involved in helping this woman prepare for the swim. I was actually called by the French coast guard last night but they didn't tell me what had happened, they just wanted a number for the boat that was accompanying her," Murphy told The Local.

"It is incredibly sad," he said, adding: "She had been our friend on the beach training in Dover and everyone's cut up about it because she was such a lovely, nice lady."

The regulations on cross-Channel swimming were very strict Murphy said, adding that Taylor would have had to pass medical checks before being granted permission to attempt to swim the Channel.

"They have to be seen by a doctor, who decides whether or not they are fit to swim the Channel. Anyone hoping to attempt it also has to undertake a six-hour preparation swim which has to be observed by one of the official organizations," Murphy said. "The boats that accompany the swimmers are also subject to safety checks."

Sunday's tragedy comes almost exactly year after Irish swimmer Paraic Casey, also lost his life trying to swim from Britain to France. Despite the two deaths in a year Murphy says tragic incidents of this kind are extremely rare.

"It is an extreme sport but the safety record of cross-Channel swimming is much better than most other extreme sports. I think since the crossing was first achieved in 1875 there have been around six or seven fatalities.

"There's no other extreme sport that can match that safety record. That is because there are so many safety procedures in place."

Murphy said that, between the two British associations, around 350 people will be involved in swimming the Channel each year, whether as part of a relay team or as a solo swimmer.

France forbids any attempt to swim the Channel starting from its side of the La Manche due to the dangers posed by heavy maritime traffic and potentially hazardous weather conditions.

The Channel Swimmers Association were not available for comment when contacted by The Local.

If you would like to make a donation in memory of Susan Taylor you can visit her charity fundraising page by clicking HERE.

(The letter A marks Cap de Gris-Nez, where the British swimmer got into trouble as she approached the French coast)