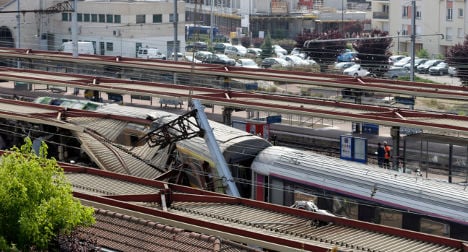 A minute of silence was held at noon Saturday on all French trains and in all stations for the victims of the accident, which took place as many were leaving for summer holidays.

The local prefect's office said the dead were four men and two women, aged between 19 and 82.

A source close to the investigation told AFP the dead included a couple in their 80s from Bretigny, three men aged 19, 23, and 60, and a young woman whose exact age was not immediately clear. Formal identifications of the bodies were underway, the source said.

In what officials described as a "catastrophe", the train came off the tracks and crashed into the station platform at 5:14 pm Friday, as it travelled at 137 kilometres per hour on its way from Paris to the west-central city of Limoges.
Four carriages of the train jumped the tracks, of which three overturned.
One carriage smashed across a platform and came to rest on a parallel track; another lay half-way across the platform. There were 385 passengers on the train.
The prefect's office said nine people had also been seriously injured in the accident, including two who were in critical condition. Health officials said at least 50 people had been treated for injuries.
Rescuers worked throughout the night searching for victims potentially trapped in overturned carriages, but the prefect's office said no more were expected to be found.
Autopsies were to be conducted on the bodies of the dead on Saturday.
The SNCF, judicial authorities and France's BEA safety agency were each carrying out separate investigations of the accident.
Witnesses said the crash site resembled a war zone, with 57-year-old passenger Marc Cheutin saying he had to "step over a decapitated person" to exit the carriage he had been travelling in.

The accident was still causing disruptions on Paris commuter lines on Saturday, while the Paris-Austerlitz station, where the train had departed from on Friday, was expected tor remain closed for several days.