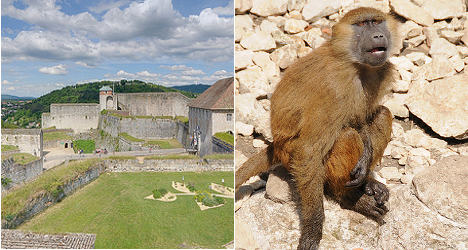 A baboon at the Citadel of Besançon. Photos: Computerhotine/flickr

The management in charge of one of France’s most famous World Heritage sites has been forced to evict a mob of baboons who had begun vandalizing the site.

The Citadel of Besançon in eastern France, described as one of military architect Vauban's masterpieces, has had to kick the baboons out of the site’s zoological gardens because of the damage they were causing to the historic site.

Despite the ramparts being five to six metres thick and 15 to 20 metres high in some places it appears the primates were set on breaking through.

“They don’t do anything out of the ordinary. Just like in the wild they tinker with things and pull at the grass, but then they started to pull out small stones at the joints in the wall. And you have to remember we are a UNESCO World Heritage Site,” said Gerard Galliot, director of the Museum of Natural History, which houses the zoo.

The baboons have been among the animals at the Citadel’s zoological gardens for forty years. But when the numbers got too high they were placed in a pen next to the Citadel’s walls.

That appears to have been a bad move but Galliot insists the monument remains intact.

“Everything is still standing, the walls of the Vauban citadel have held out for many centuries, but these baboons are just not used to these places,” he said.

The primate gang is to be broken up with new homes to be found for them far and wide. Some have already been sent off to a zoo in Algeria, others will be given new lodgings at a zoo in the south west and 13 are still to be re-housed.

The Citadel of Besançon was built in the 17th century by Vauban and occupies an 11 hectare sight on Mount Saint-Etienne overlooking the capital of Franche-Comté.  It was designated a World Heritage site in 2008 and is visited by around a quarter of a million tourists each year.

As well as the zoo the citadel’s natural history museum also houses an aquarium , a botanical gardens and a children’s farm.