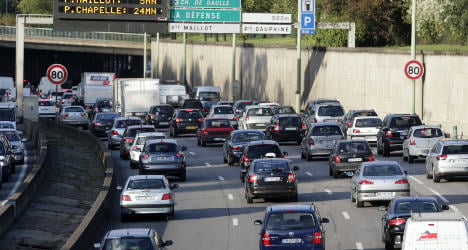 Traffic around Paris is expected to be particularly bad on Friday and Saturday. Photo: Kenzo Tribouillard/AFP

Another weekend and another mass exodus from French cities as holiday makers go off in search of the sand and the sun but it may take them a while longer to get there.

The French government's website Bison Futé, which monitors traffic levels throughout the country is warning of a hectic weekend ahead on the country’s motorways.

Friday has been designated level Orange on routes leading out of major towns and cities meaning traffic is expected to be particular heavy. Saturday looks set to be even worse with Bison Futé issuing a nationwide red alert, which means potential traffic jams and tailbacks in certain parts of the country.

Sunday however is Bastille Day and traffic when traffic levels are expected to have eased, so it might be worth delaying your journey even if it means missing out on watching the annual parade.

Although the summer holidays in France began last weekend, Friday and Saturday is set to see thousands more head off towards the beach. Despite Interior Minister Manuel Valls advising drivers to take care on the roads, last weekend saw a number of fatal road accidents.

“Traffic density will grow and heavy traffic is expected on the main motorway routes from the north of the country towards the Mediterranean or to the coastal areas in the west,” said a press release from Bison Futé.

The main problems on Friday will be on the roads leading out of cities, especially in the Paris region of Ile de France.

The A6 and the A10 motorways towards the south are expected to be particularly busy and drivers are being advised to avoid the A86 around the Tunnel sous le Marne where road works are ongoing.

Drivers are advised not to leave the country’s big cities between 4pm and 8pm and between 7pm and 9pm for Paris and Ile-de-France.

Drivers should also remember the Tour de France stage 13 is taking place between Tours and Saint-Armand-Montrond, which will also disrupt traffic on Friday.

To keep up to date with the latest traffic news or to find out how to avoid the jams visit the Bison Futé website which has a version in English.