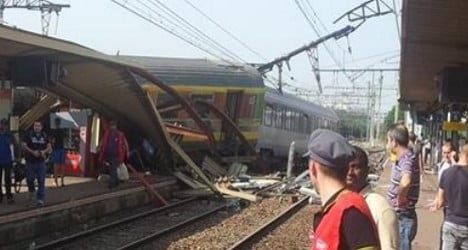 An Intercity train heading from Paris to the central city of Limoges derailed at the station in the town of Bretigny-sur-Orge on Friday leaving at least six people dead, French authorities confirmed. French President François Hollande was said to be on his way to the scene of the disaster on Friday evening.

France's Interior Minister Manuel Valls said that information on the number of dead and wounded was "constantly evolving", adding that several train carriages were lying on their sides. Many more passengers were left injured, including nine who are said to be in critical condition.

The train was the 3657 Intercité Teoz train and was heading to the town of Limoges from Paris Austerlitz.station. It was reportedly carrying around 370 passengers on board when it derailed at Bretigny. The Local understands the train was not due to stop at the station.

The Paris prefect's office said a "red alert" plan had been activated and hospitals in the area have implemented emergency plans to try to cope with the number of injured.

The cause of the accident is not yet known but a source with French rail operator SNCF told French media there may have been a problem with the points.

However a police source also told AFP: "The train arrived at the station at high speed. It split in two for an unknown reason. Part of the train continued to roll while the other was left on its side on the platform."

A separate source with the SNCF national rail service told AFP "It was not a collision and it was not a problem with the speed,"

The accident took place at 5:14 pm, the SNCF said, minutes after the "Intercite" train left the Paris-Austerlitz station.

Bretigny Mayor Bernard Decaux told newspaper Le Parisien that there was chaos at the station.

"Everyone is running in every direction, there is panic," he said. "It is an apocalyptic scene. We are trying to organize things.".

French newspaper Le Parisien reports some of the victims were electrocuted and crushed in the crash.

There are also reports that many people are still trapped in carriages.

One witness described the horrific scene to Le Parisien. Bazgua El Mehdi, 19 was on an RER C train at Bretigny station at the time of the crash.

"I heard a loud noise. A cloud of sand covered everything. Then the dust dissipated. I thought it was a freight train but then we saw the first casualties," he said.

"Many passengers on the RER are crying. I am shocked. Some people were filming the scene. A wounded man became angry with them."

Guillaume Pepy, the CEO of SNCF, said: “We do not know the reason for the derailment. Coaches three and four derailed and then the four others. There were about 370 people on board.  It's very emotional.”

A clearly upset Pepy expressed the rail company's "solidarity with the victims and their families".

"Rail catastrophes are something that upset everyone and all of those who are committed to our national rail service," he said

Train traffic on the line has been completely suspended.

Hundreds of passengers were in the station at  the time and many have posted pictures of the scene on Twitter.