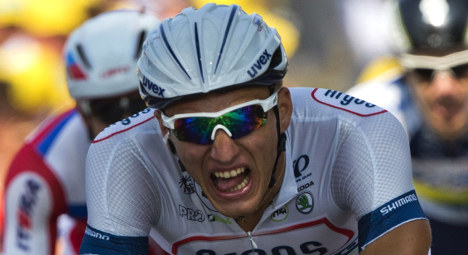 Germany's Marcel Kittel claimed his third stage win of the 100th Tour de France when he beat Britain's Mark Cavendish to victory in the 12th stage on Thursday.

Kenyan-born Briton Chris Froome of Team Sky finished the stage among the leaders to protect his 3min 25sec lead over Spain's Alejandro Valverde of Movistar.

Froome did well to stay clear of two crashes in the closing kilometres, and despite the flat terrain, he admitted: "It seems like there's no such thing as an easy day on the Tour de France. It was a hard day out there.

"Every time I cross the finish line there's a little sigh of relief."

The victory was Kittel's third win of the race after the opening stage and stage 10, when sprint rival Cavendish came third having caused a crash which brought down Kittel's Argos teammate Tom Veelers.

Kittel had one less opponent to deal with for the bunch gallop to the finish line after compatriot Andre Greipel (Lotto) was one of several riders brought down in a crash inside the closing four kilometres.

But when it came to the crunch the German, racing his second Tour having crashed out win-less on his debut last year, showed his previous wins were no fluke.

After the final bend helped thin out the group of frontrunners even further, Cavendish was brought onto the home straight in textbook fashion by Belgian lead-out man Gert Steegmans.

Kittel, however, jumped quickly on to Cavendish's wheel in the final 250 metres and pulled off to the left to pass the Manxman with relative ease in the closing 50.

"Today was a true sprint, that's why I'm particularly happy," said Kittel, who had beaten Cavendish earlier this season in the Grand Prix de l'Escaut.

"I've waited a long time for a moment like this."

Kittel, though, had one less opponent to deal with for the bunch gallop to the finish after compatriot Andre Greipel (Lotto) was one of several riders brought down in a crash inside the closing four kilometres.

"Edvald got caught out in the crash but we don't think his collarbone is broken," said Brailsford.

Omega-Pharma sprinter Cavendish, who on Thursday had urine thrown at him by a roadside fan during the 11th stage time trial at Mont Saint-Michel, has won only one stage so far on this edition, taking his career tally to 24.